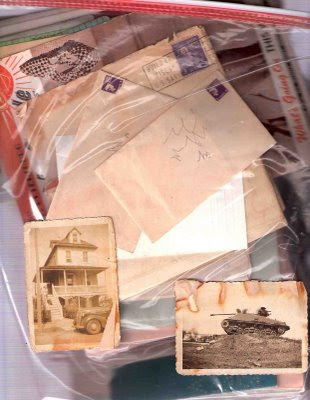 I've seen the list posted on some of the internet social networks called "Twenty-Five Random Things About Me," that is, little things about yourself other people are not likely to know. I thought the assorted lists were interesting for the most part, so I decided I'd start with one of my own. I'm not feeling particularly ambitious today so I'm only going to tell you about ONE "random thing."

I read other people's mail.

In my own defense, let me say that the mail I read isn't ever from this century, that the letters have been long abandoned, and that I don't read them just to be nosy. (You do understand that all writers are nosy, right?) I read them because I want to "know," to understand what it was like living in a specific "other time, other place" -- in case the Muse decides this or that would make a good backdrop for a story.

So, these are "found" letters I'm talking about, usually discovered by family or friends or neighbors who happen to know that reading old personal correspondence is my way of doing research. A couple of weeks ago the dh went antiquing with another retired neighbor who restores furniture and resells it, and he came home with the equivalent of a mail jackpot.

There were over a hundred letters in the batch which included draft cards, two photographs, and other odds and ends, and except for one, they written by the same young woman who lived in Pennsylvania, and the dates run from 1949 through early 1951. ALL of them are love letters to her husband who, because of a floundering post-war economy, had to work in a town several hours away. She only saw him briefly on the weekends. Because of this separation, the letters are also "slice of life." She wrote to him nearly every day -- and sometimes twice a day -- to tell him her news and what she and their three-year-old son were doing -- a window on her world, as it were.

I had forgotten what life was like in pre-air conditioning days, i.e., that one had to get up at 6 AM to get the heavy chores like ironing done before it got too hot and that it could take hours to finish it. I had forgotten what big news it was when someone in the family or on the block got a television set -- usually after being on a waiting list for months. One particular brand of TV she mentions I'd never heard of -- Capehart.

In nearly every letter, she also included a "letter" from their son, some of them in miniature envelopes with a miniature 3-cent stamp, a kind of "kid" stationery. (If you look at the photo above, you will see two of them along with a regular-sized letter with a 3-cent stamp for comparison -- I personally have never seen anything like these before.) She often told her husband what the little boy "said" in his tiny letters, I assume in case he was asked.

In reading her words, I think that she must have taken all the advice in the women's magazines of the day to heart. She never failed to say how lucky she thought she was to have married the man she truly loved, and never once was she angry with him about anything. Whenever she gave her opinion about something (usually his work situation), it was always done tactfully and with love. When he was passed over for promotion, one that might have meant they would no longer have to live apart, she gave him the best pep talk I think I've ever read anywhere, and all the while her heart must have been breaking.

But, she didn't hide how lonely she was -- or how much she was drinking. Too much, I would say, for most of all of 1949 and into 1950. She clearly didn't think so because she would mention in detail what she'd had to drink and under what circumstances, as if these opportunities made her happy and were important to her. After a time, I could tell by her handwriting whether or not she was sober. But she apparently had an internal or external epiphany of some kind and stopped. Thereafter, she only mentioned occasionally, when she was in a social situation, that she didn't drink anything while she was there. (Her handwriting suggested that that was the truth.)

I now know a lot about her life -- her favorite radio shows, favorite music, the names of people who came and went, her parenting skills with a three-year-old (I thought they were excellent), Christmas preparations, Halloween (the little boy dressed up as "Mickey Mouse"), the Korean War, her relationship with her mother and her sisters.

Which brings us to the only letter in the batch she didn't write. It's also the only one without an envelope. It was from her mother and very difficult to decipher, not just because of the handwriting but also because she didn't punctuate the ends of sentences -- except for one question mark -- or capitalize the beginnings. Essentially, the six page letter was one long sentence. I worked through it, and I learned that her other daughter had run away from her husband and had suddenly appeared on the mother's doorstep with both of her children in tow -- children who had nothing to say to anyone. The family was doing their best to hide her because they believed her husband would harm her if he found her, and this letter was a grave warning to expect to hear from him and not to tell him anything. Nearly 50 years later, you can still feel the fear.

I don't know what happened to her, to any of them, and likely never will. That's the downside of this particular "random thing."
Posted by Cheryl at 4:10 PM