The Round House in Rockwell NC 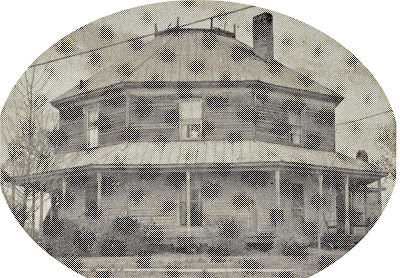 I came across this clipping of "The Round House," as it was known in the small town where I grew up. The photo isn't all that clear, but I'm going to share it with you anyway. Actually, I may be sharing it with you again. I can't remember if I've blogged about this structure before not.
The house was located on US Highway 52, and it was unusual not just because of the round architecture, but also because the kitchen was separate from the main house. My fey mother tells me it was not haunted. (The haunted house was the "Heilig House," several doors down.) The entire structure was demolished, I believe, in the 1960s.
The house was actually in the family for a number of years (which is why Mom is sure there were no ghosts), and it's the backdrop for a number of old sepia family photos. My great grandfather (Wagner) lived there for a time, and according to the family oral history, he used to sit on the porch and play his fiddle for the assorted children in the neighborhood -- when he wasn't feuding with one of his daughters. The house later belonged to a great uncle (Beaver), but he "lost" it. Details are sketchy as to how that came about, but it's said that he took the loss very hard. It so happened that the subsequent house he and my great aunt and their children moved to afterward had a clear view of "The Round House" from a certain point in the side yard. My great uncle would often sit there in the late afternoon, facing in that direction, pining for the house, the women in the family opined.
I have a very dim memory of having been inside it, but I remember well the box camera "picture-taking" that placed it so often in the background. In one I was posed with a dog I didn't want to be posed with -- because it had very bad breath. I think it may have been my dog, but I'm not sure about that detail. I am sure, however, that it needed a Tic-Tac.
So. That's all for this time...
Posted by Cheryl at 2:49 PM No comments:

Labels: "The Round House", Rockwell NC 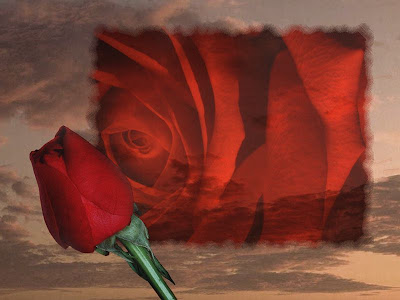 Deena Rose Moore
1950-2010
She was "Deena the Poet" to me. She had her first poem published in 1979. "Here it is!" she wrote in the margin of my copy of the anthology. "Long time in coming but I feel I have arrived! Deena"
The poem was called "Blind Trust," and as Deena said, here it is:
BLIND TRUST
Thorns of green eyes scratch
The beauty of the woman above
Perched with grace on a wire
Embraced by admiration
Entranced with the beat
Lady trimmed in red
Towering above the crowd
Banked by a canvas enclosure
Darkness is hers alone
Seeing no obstacles in her night
As the band plays on
Each step dependent
On their melodic vision
Only one man below
holds the hand of fate
He lives in a house
Built of silence--
When the music stopped,
She died
Posted by Cheryl at 7:39 PM 2 comments: