WRITING (ABOUT) LIFE--I Have Something To Say... 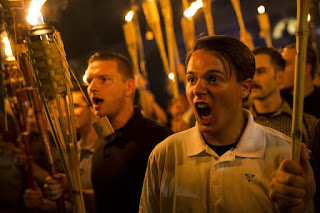 My dad was a World War II vet. The Battle of the Bulge. The push to Germany.
He had a photo album of pictures he'd taken during the war. I never saw him look at them, but I looked at them often, trying to understand this part of my dad's life because he was only twenty at the time and because he still had nightmares. I understood what was happening in all of the photographs except one. It was a photo of men with shovels digging into a mound of soft earth. One man in the foreground had such a look of detachment, as if in his mind, he was somewhere else and whatever it was had nothing to do with him.

One day, when I was fourteen or so and looking through the album, I asked. "What are they doing?" And I instantly regretted it because of the look on my dad's face. He took the album from my hands. I thought he would close it and put it away, but he didn't.

I didn't say anything.

"Little girls," he said after a long time. "They were all wearing white dresses."

"We knew the Nazis were going to execute them--some men from the Resistance told us. Punishment for the people in the village. We tried to get there in time."

He sat staring at the photograph, until finally he closed the album and handed it back to me.

When I look at photographs of the Charlottesville violence like the one above, I'm glad that my dad isn't alive to see it. And I think of little girls in white dresses.