My late father had a number of photographs taken while he was a cannoneer in the 963 Field Artillery during World War II. Most of them have been lost in the shuffle of time.

But I found two the other day, two he had sent to my mother while he was overseas. I can't imagine how he managed to get film developed in the middle of a war, but he apparently did. I believe these were taken sometime around the Battle of the Bulge. He was twenty years old and he hadn't heard the news yet that he had a baby girl. Both photos are labeled.

"Loading the gun" this one says on the back. I believe he's the one on the right helping with the ramrod. 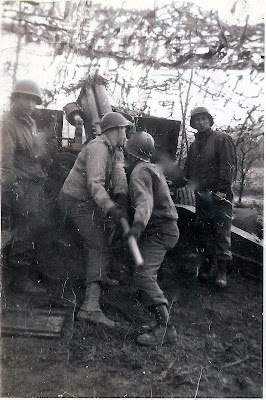 And this one says: "Firing the gun." He may be the one kneeling with his head turned away from the noise. 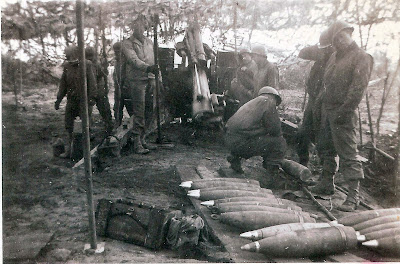 Both notations are written in unfaded blue-black ink. He had a very nice handwriting, my father. I'm struck by this because I've seen very few things he'd actually written. None of his letters survive. There are the brief captions on the backs of these two photographs, and a note in a velvet jewelry box containing a gold locket embellished with mother-of-pearl and an real-looking enameled violet with an amethyst center he'd given my mother during their wartime courtship.

Link to another photo. 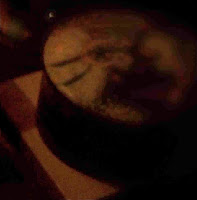 BOOK NEWS: A Reissue
THE MUSIC BOX, formerly a Silhouette Special Edition titled TENDERLY, will be released in April 2011. It's currently available for pre-ordering on amazon.com and Barnes & Noble and Borders.
Posted by Cheryl at 10:42 AM 4 comments:

I've been wondering how tree frogs manage to get inside the house. Apparently they knock and wait for somebody to answer: 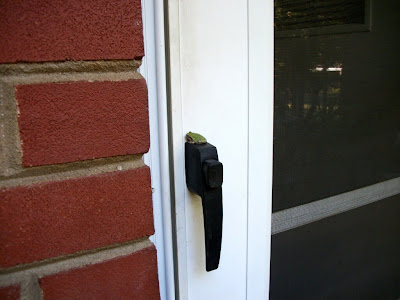