THE PRISONER -- and Visual Writing 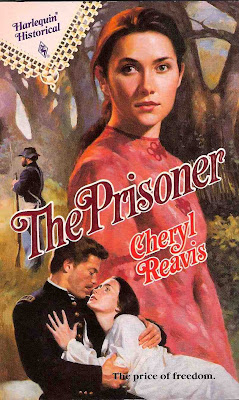 I'm a visual writer, that is, it helps me to actually see the place I want to write about, whether it's literally or through photographs or drawings. What I have learned is that if it's real to me, it's going to be real on the page -- and "seeing" makes it real.

One of the more enjoyable aspects of the writing process -- my writing process -- is going on a quest for settings. If I can, I go to the actual place and take photographs myself. If not, I use other sources. VICTORIA magazine in its heyday was a wonderful source for "mood" photographs of houses, interiors and gardens. NATIONAL GEOGRAPHIC is, too. Basically, I look for an image that will convey whatever it is I need to "feel" about the story I want to tell, and I keep that image where I can see it throughout the writing of the book. I never really know what that unnamed "something" is going to be, but I always know it when I see it.

I used a particular Salisbury historical landmark, known locally as the Hall House, in my first book (my first book, not my first published book -- it took a while to get THE PRISONER on the shelves). In it, the house is always referred to as "the Doctor's house." General George Stoneman and his officers really did billet there when he and his cavalry raided the town in April of 1865. My fictional "Amanda" stayed there, too -- but only inside my head.


The following photographs I took over a decade ago -- maybe even longer than that. 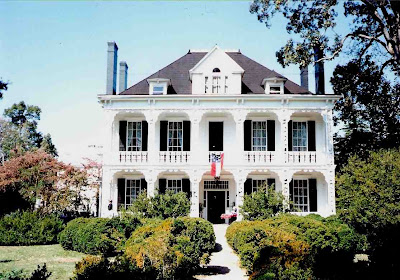 This was taken during an annual October Tour of Salisbury's historic homes, but it's open to the public all during the year.


I think of this next shot of the house as my "ghost" photograph. It's strangely eerie-looking -- as if the house were melting away, but the trees look fine. It had nothing to do with camera settings. I took all of these with a 35mm Canon Snappy. There was nothing to set. Also, there were a many, many people around, but somehow I only managed to get one in the frame. 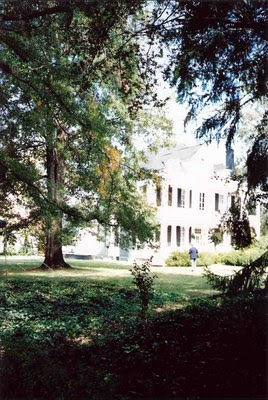 Here is one of the interior shots -- the bedroom where I imagined "John Howe" was taken after he was wounded: 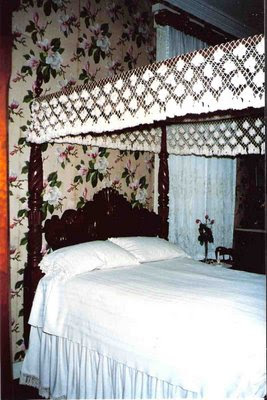 And this is the dining room. It had a more important role in the second half of THE PRISONER. Only the first half of the book was published. The original manuscript continued the story of "Amanda Douglas" and Captain "John Howe" until he was in his forties, but that part didn't make the cut. I still get reader email about the book -- halved or not. 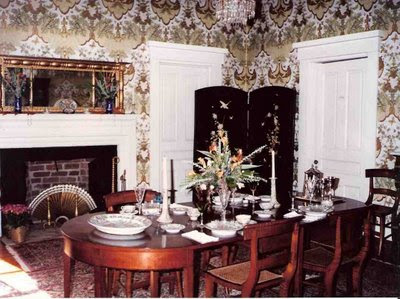 During this particular October Tour, there was an Civil War reenactment group on hand. I'm going to show you photographs of them, too. 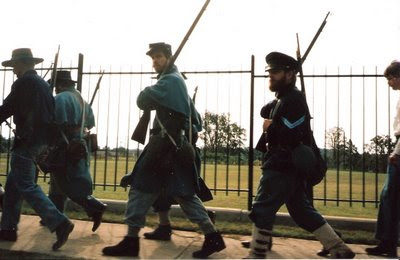 In this one, the Yankee invaders come pouring in...


And they were very scary. I can't begin to imagine the number of hours these men (and women) put into "getting it right" and making history live again.

The thing I liked about this particular group was that they stayed in character between events. If you encountered one of them on the way to his car to get something, he still spoke to you as if he were a 19th century entity, or if you happened to come near to a pair of them in conversation, they wouldn't be talking about the Dallas Cowboys. Like as not, it would be about rumors of when the war would end or where the fighting was at that moment. 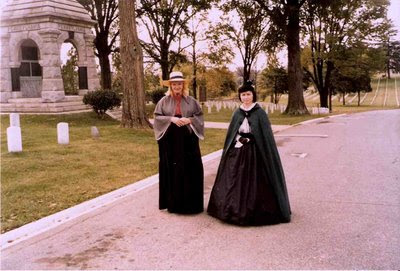 Part of the reenactment took place in the National Cemetery, which was the location of the Confederate prison during the Civil War and where a large number of unknown Union soldiers who died there are buried. The stone monument behind these two ladies is a memorial erected by the state of Pennsylvania to honor their dead. A coworker of mine, who was a nurse during the Vietnam War, is buried directly across from it. My late father and two great uncles are also buried here, as are a number of World War II nurses I knew and worked alongside when I was a "probie."

Which brings us to the drummer boy. I asked him if I could take his photograph. He very shyly, very politely gave his permission. I think he's very much like "Tobin" from THE PRISONER, except "Tobin" was a bugler. 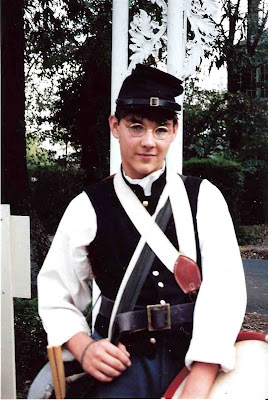 One of the reasons I wanted to show you these is that Salisbury is having a big "tourism" push. If you're ever in the area, I thought this blog post might entice you to come see history -- and several of my book settings. The NC Transportation Museum is also nearby -- in case you need some kind of authentic transportation for your next movie. (This is where, it just so happens, George Clooney got his railroad car for LEATHERHEADS.) The museum is a nice place to come and look at vintage trains and automobiles. Some days you can take a short train ride around the yard with former railroad men volunteers, who help keep their particular corner of history alive.

So go to the Visitor's Center and tell them Cheryl sent you. At which point they will frown, look at you blankly and say, "WHO?" (These people, bless their hearts, are very difficult to impress.)
Posted by Cheryl at 12:29 PM