The Harlequin Calendar and Harking Back 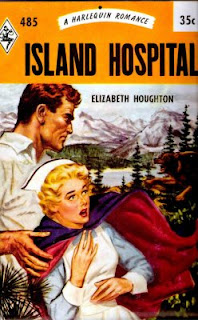 Harlequin sent me a very colorful, high-quality 2009 calendar in celebration of their many years of publishing romance novels. Each month has a vintage Harlequin cover, and this particular one is the one that caught my eye. Why, you may ask? Because the nurse's cap looks like my nurse's cap. Back in the day, when nurses still wore caps, every school of nursing had its own distinctive headgear, whereby those in the know could immediately identify from what school a nurse had graduated -- and some caps had a lot more prestige than others.

I was always partial to the (Charlotte) Presbyterian Hospital School of Nursing caps. They looked like tiny pleated birds. This calendar one looks like a Rowan Memorial Hospital School of Nursing cap. The student nurse uniform (if that's what it is) is similar, too, except ours were short-sleeved and blue and white striped. And, unlike the Harlequin heroine's, they were one-piece, i.e., the apron didn't detach. They were so heavily starched you could actually stand them on the floor. The collars and the edges of the cuffs on the sleeves made your skin raw. We used to rub them with Ivory soap to blunt the scraping. Even so, I had calluses on the backs of both my arms and a streak on my neck for at least a year after I graduated because the constant rubbing.

We also had the same kind of navy blue and red cape. (I say "we," but I don't mean me. They were "extra" and so expensive I couldn't afford to buy one.)

I scrounged around and found an old, back-in-the-day photo of either my or my roommate's cap. It's hanging on the mirror. The cap holder thing was made out of a strategically bent coat hanger that had been wrapped in wool yarn. I remember that, but I don't remember who made it. The cap hangers were very handy, though. See how similar the caps are? 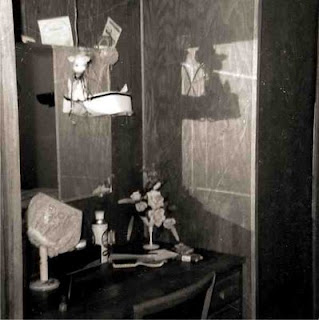 Now I'm going to give you a glimpse of what the dorm rooms looked like. None of them were air-conditioned, and they were all the same except for the wall color. My first year, the walls of my room were the color of very weak chocolate milk. Clean bedspreads were provided once a month, and as often as not, the ones my roommate and I were issued were a lovely shade of battleship gray. It was...depressing, but since neither of us had much of a cash flow, we were stuck with it. After my probie year, I got to move to the second floor, and I was assigned a room that was robin's egg blue instead of...whatever that color was. Gray bedspreads didn't look nearly as bad in that room -- when we got them. In the blue room, we usually got beige with brown stripes.

Here are the photographs. You'll have to use your imagination: Robin's egg blue walls. Bedspread, beige with brown stripes. In the second picture, you can almost see the framed photo of the dh, then boyfriend, who was in the army. He was out of basic training by that time and learning to build bridges so he could blow them up: 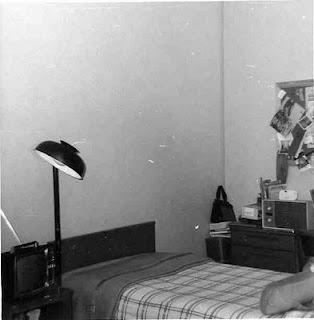 I'm surprised by how fuzzy the nursing school memories have become. What do I remember clearly about the student nurse time in my life? Anybody could hit you who wanted to.
Posted by Cheryl at 8:54 PM