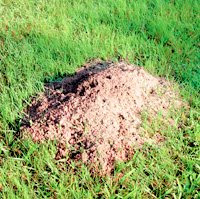 First, we have the Fire Ant Wars. My mother's yard is infested -- which she learned when she inadvertently stepped on a mound as she was about to bring in the mail. She received a number of painful (and ultimately infected) bites before she was able to escape the swarm. Those are better now, but she'll carry the scars. She's very fortunate not to have been allergic.

We discovered that there were dozens of mounds on the property, and we've done the recommended bait treatments. Not that it will help. The yard across the street is infested as well and thus far untreated. Even under the best of circumstances, the information on fire ant control isn't reassuring. As far as I can tell, the best you can do is make their lives miserable. I can remember hearing on the news when I was a little girl that "the fire ants were coming." I, of course, expected them to arrive any minute and spent a lot of time on high alert. I'm sorry to say they finally made it. And my mother is wearing boots.

I "did lunch" Monday at the Farmhouse Restaurant with my longtime nurse-friend, Diane. (Apparently I have assorted "friend labels" -- "nurse," "writer," "childhood," "school," "co-worker," "Critique Group At Fred's," etc.) Diane and I met when my son was small. She was working pediatrics, and he was a wee patient with another serious episode of croup and in a "croup tent." For those of you familiar with the contraption, yes, he did. He put his breakfast toast into the mist hole. I was supposed to do three things during this hospitalization ordeal -- keep him inside the tent, keep him from pulling out his IV antibiotic drip, and keep him away from the mist hole. But apparently I blinked, and into the mist hole the toast went. You see, croup tent mist holes beg to be plugged up with the nearest thing handy, usually some kind of food off the meal tray, though crayons and Matchbox cars work nicely, too, as do napkins, salt packets, and socks. It's a clear sign that a child is feeling better, but soggy, spewing, oxygenated bread crumbs make quite a mess. (I took a lot of heat for having blinked.)

Diane and I later worked together -- at a urology clinic and then as public health nurses until she moved away. We manage to get together once or twice a year now. She, like Jo, is someone I'm lucky to have had in my life -- a friend with whom I can just be me. I suppose it's a tribute to our particular friendship that her famous cousin (Tori Amos) never once came up in the conversation. Too much else to talk about -- like our blood sugar levels.

Tomorrow is soccer game day. I think. It's supposed to be warm and not raining. Hopefully, it will also be bat free. Please send the Thunders all the positive "winner" vibes you can spare.

I'm still waiting to hear regarding the proposal. It's clearly time to make a decision. Go ahead and work on an unsold book or put together some more proposals? (sigh) I think I want to ride up to the Blue Ridge Parkway and look at the autumn leaves while I'm deciding. A writer-friend who lives near Grandfather Mountain tells me they are absolutely beautiful this year. (What can I say? If there's a rose that looks like it might have an actual scent, I'm going to stop and smell it. I believe this is why I'm not rich and world famous.)

I love reading your blog, Cheryl. Fire Ants??!! Your poor mom - hope the boots keep her safe.
And I'm rooting for the proposal to sell - I want more Cheryl Reavis books to read and I want them NOW. :-)

Thanks, Lois. I really love this as-yet-unwritten book. (It has the "riding through the summer night with the people on the porches" scene.) I don't think I've felt this strongly about a project since my first historical, THE PRISONER. And so far so good with my mom and her boots. She's afraid to do her yard work without them. Fire ants swarm all over you before you even realize you've disturbed them. Take care. I'm glad you "stopped by."
~Cheryl