Come Walk With Me... 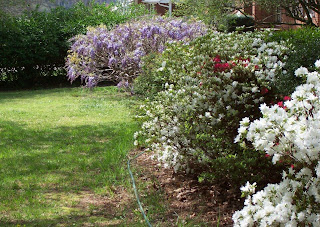 Things are budding and blooming here. I thought I'd show you around:

Many of the plantings in the yard are flowers and shrubs given to me over the years by family and friends. (I don't landscape. I "memory keep.") The wisteria in the distance came from my late sister-in-law. The forsythia hedge behind it is the one I showed you in an earlier post. It came with the house.

The azaleas I actually bought. They were seriously trampled by roofers a few years ago, and they've bloomed beautifully ever since. Which goes to show you, I guess. Sometimes things aren't nearly as bad as they look.

This is the first time there have been open blooms on the wisteria in years. An April cold snap gets it nearly every spring and probably will again next week, according to the Weather Channel. Still, it's lovely now and full of butterflies and bumble bees. 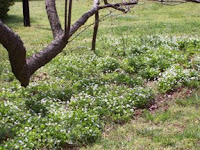 These are white violets blooming under a wild cherry tree. The violets also came from my sister-in-law. One small bunch planted, and now they're everywhere.


Another view of the azalea: 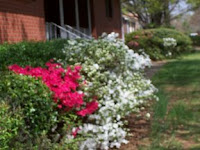 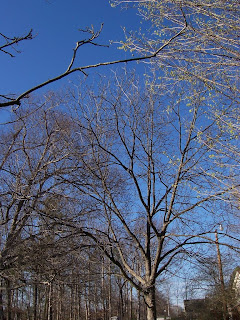 This is a pecan tree my late father started from seed. Its two "partners" came from the dh's late Aunt Peg. All of them bear every year, but we never get any pecans to speak of -- thanks to our overabundance of squirrels. We just can't seem to beat them to the crop. I feel like "Wile E. Coyote" every fall. 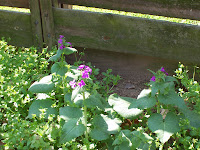 "Money" plants, so called because the fall seed pod is a flat round disc which looks like a coin and looks nice in a dried arrangement. These were also a "gift" planting. 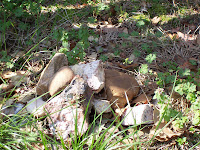 Nearby is the cat's cairn, one of "The Girls," who supervised the writing of many a book. A very large toad lives among the rocks. We scare each other on a regular basis during the summer. This is a place of wild flowers -- hen bit and mouse-ear chickweed mostly.


That does it for the "flora" part of the tour. I think there may be some "fauna" in here -- but I don't want to stick around to see what it is: 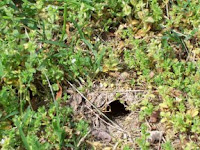 thanks for sharing - it snowed this morning here in Lansing, Michigan.

You're welcome, Kathie. I hope it melts soon.

Hi. I really enjoy you posts and pictures. Wisteria is one of my favorite plants/flowers. Unfortunately, I don't have any personally.

I do have a questions though about the cat cairn if you don't mind me asking.....

Thanks for visiting. Re: the "cat cairn," this is where one of my pair of cats is buried -- between the day lilies (also "memory keeper" plants from a family member) and the "money" plants.

The cats were known collectively as "The Girls" because they went everywhere in tandem. They were both "rescued." I got her from a pet store when she was a kitten. I had no intention of buying a cat -- I didn't even know I liked cats, but, she was "on sale," and my son, who was in high school at the time, had a friend who worked in a pet store and who had told him that when kittens went on sale, it did not bode well for the kitten. So I bought her -- we bonded through the wire cage somehow.

She lived to the ripe old age of sixteen, running the household until the very end. My son used to refer to her as "Aunt Bea" (from the Andy Griffith Show) because she nagged him from the time he got up in the morning until he went out the door to school. She apparently felt it was her job to hurry him along -- I found this very helpful, but he didn't. He was a collector of large rocks when he was a little boy, and some of those are the ones used to mark her grave. He and the grandchildren always pay her a visit whenever they come.

Thank for answering. Do you mind me asking about your other cat? I am a cat person myself. I have three currently.

My other cat is the lone survivor of a dog attack on her mother and litter mates when she was a kitten. My son rescued her and brought her home in his shirt pocket, where she was only too happy to stay. She has a blue eye and a golden eye, which is supposed to often be indicative of deafness -- at least in one ear -- in a white cat, but she never seemed to have any problem hearing. If a cat's age is counted the same way a dog's is, then she's at least 112. She's still reasonably spry for a feline "senior," and still loves to eat. I think this is true with a lot of rescued cats -- they're always afraid the food will stop appearing.

I always loved having "Little" chase the shadow from the yoyo hanging from my doorway as the shadow appeared to be running up your Door.

I love the pictures. I post pictures of my flowers all through the blooming seasons, too.

Good to "see" you. Hope you're feling better!

CherylStJ! What a nice surprise. Thanks for dropping by. It's good to "see" you, too.

Someone was telling me not long ago that she'd seen an online discussion re: HH authors, and you and I were referred to collectively as "The Cheryls."

(She didn't say if there were T-shirts. LOL!)