AWAKE, Jason Isaacs, and Me 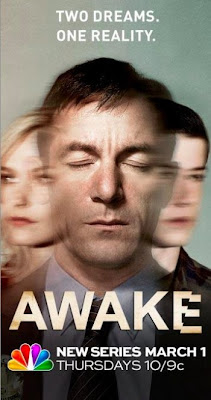 I know I said I was mad at NBC for canceling PRIME SUSPECT and they couldn't have my 10 PM Thursday time slot ever again, but I watched AWAKE. (What can I say? I like Jason Issacs.)
The question is, can I understand it. Here's what I think happened: Jason Isaacs (Malfoy's father if you're wondering who Jason Isaacs might be) is a police detective. His wife and his son were killed in a car accident. Now he has two states of consciousness. In one, his wife is alive, but his son isn't. In the other, his son is alive, but his wife isn't. But he can't tell which one is "reality"--possibly neither is. He apparently travels between the two when he goes to sleep, and the things he learns in one mind state help him to solve crimes in the other mind state. Or something like that.
There's a big "Wait--what?" frown-factor to watching all this unfold. The bottom line, of course, is Jason Isaacs. Which is probably how they pitched the premise to the show's money people. ("But it's JASON ISAACS!")
Will I program NBC back into that 10 PM Thursday time slot on the DVR? We shall see. As I said, I really do like Jason Isaacs. If worse comes to worse, I'll pull out my CASE HISTORIES DVD's and watch those. (He was excellent in CASE HISTORIES.)
Posted by Cheryl at 1:43 PM