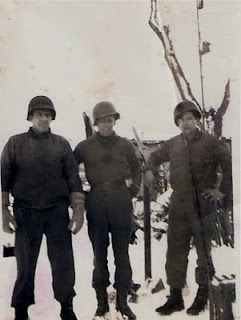 In light of today's date, I thought I'd show you this photograph. It was taken in December, 1944, circa the "Battle of the Bulge" six months or so after the June 6th D-Day invasion.
My late father, who was by then a cannoneer in the 963rd Field Artillery (he started out as a paratrooper in the 82nd Airborne but was transferred into a field artillery unit after breaking several bones in an unfortunate encounter with a tall tree) is on the right. He was twenty years old at the time the photo was taken. The soldier in the middle, I believe, was a Texan named Stewart.
My father's elbow is resting on a machine gun he salvaged from a downed fighter plane. It and the commandeered metal pipe the gun is sitting on were used to provide more precise firepower against being strafed during "A" Battery's push into Germany. Apparently, adding "machine gunner" to his military resume was all self-taught, "on the job training."
Posted by Cheryl at 1:41 PM

Hello Cheryl;
I am editing the original unit history and would like to include your dad's photos in it. Also, I didn't see his name. Thanks.