The Mystery of the Cadet Diary #2 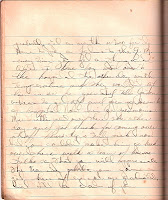 Here is the second installment of the cadet's diary:

Forgot to write anything yesterday. Went to class this morning and after dinner, I laid up on the press and went to sleep. Got up and went over to the gymnasium to listen to a “keep your pants buttoned” talk by Dr Ravanell at 4 o’clock. Came back and slept until retreat.

Tonight I was listening to the crystal set (Transcription Note: an early simple radio receiver with a crystal touching a metal wire and no amplifier or speaker, necessitating headphones or an earphone) when Graves came around. I thought I heard him coming down the gallery, but when I asked Moss if it was he said “no.” I heard him rap on the door and got the ear phones off before he got it open. Thats (sic) some fast work. I’ve got to go to the Cadet Committee tonight for about three or four reports. I don’t see how I can get out for less than ten tours. I’m going to roll me an own (?) and listen to Glen Gray (Transcription Note: Glen Gray, a 1930s bandleader) for a while now

Nothing unusual today. I got Mr. Berger’s ice cream at dinner. Went back over to the gym this afternoon in Company formation and heard the rest of the sex talk by Dr. Ravanell (sic)

I really knew my history lesson today. It was the first time I had really studied it in a long time.

Mr. Andrews said that there were 70 boys in the hospital and 69 had the flu. Theres (sic) a rumor about us being restricted this week and I’ll have to stay in Friday nite and finish that drawing so I don’t mind much.

No exercises this morning thank goodness. By the way we are restricted this weekend.

The corps went to a picture show over in the gym last nite – “A Mid-Summer Night’s Dream” – It was supposed to be a good picture, but it wasn’t very plain. Everything seemed blurred. The sound was awfull (sic) too. I couldn’t understand but one sentence In (sic) show – “What fools these mortals be.” They had a boxing match tonight but I didn’t go – stayed down in Sturkey’s room till about eleven and watched him do tricks.

A bunch of the boys were drunk today. Some one said that a man came out here and got around $100 (Transcription Note: Around $1500 by today's standards) worth of orders and delivered it. About half of “D” company is on its back right now.

I had to do yet another Google search, this time re: "Glen Gray." I'd never heard of him, but apparently he was a popular bandleader during the 1930s and 1940s. There is a clip of one of his performances on YouTube if you're interested. I had to smile at the cadet's rush to get rid of his radio headphones. In 1936 this would have been a lot harder than it sounds.