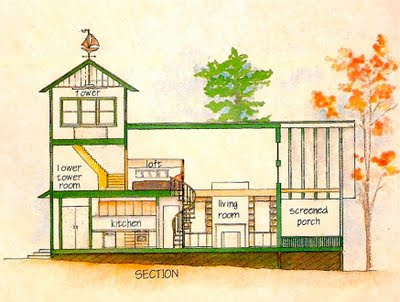 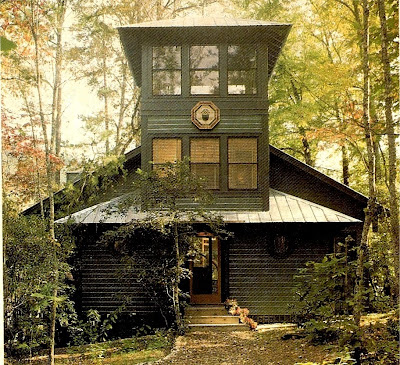 I usually try to set attainable goals. It saves a lot a wear and tear on my already stressed psyche. (Let's just say it's not easy being on the receiving end of the Family Bat Phone.)
Recently, in keeping with my usual mild-mannered goal-setting, I wanted to go see the new Harry Potter movie. I like Harry Potter. I like Good vs. Evil, especially when Good wins. Besides that, I'd never seen Harry on the big screen, and I wanted to.
But did I make it to the movie? No. I did not. Not even close. And I thought somewhat drolly, "Cheryl, you need to stop it already with the impossible dreams."
But then I thought, why not have impossible dreams? There's even a song dedicated to the concept. If I can't pull off the little ones, what's the problem with not pulling off the big ones?
Hence the blueprint and the photograph above.
They're from a SOUTHERN LIVING magazine -- a very old issue of SOUTHERN LIVING magazine. This, for all intents and purposes, is my dream writer's cabin. I fell in love with it the first time I saw it, and I've saved the magazine ever since. The magazine has seen better days, so I thought I'd scan the photos that are essentially my heart's desire before they disintegrated. Then, I thought, I'd show them to you. (You can help me pine.)
So. Here we go.
The first thing that's so appealing to me about the cabin in the photo above is the tower. What a wonderful place to write. Next is the color. The green reminds me of the buildings in the North Carolina State Parks when I was a little girl -- Morrow Mountain State Park, specifically, which eventually became the partial setting for the historical, FORBIDDEN BRIDE. According to the blueprint, there's also a screened in porch. It doesn't get much better than that.
This is the interior of the tower (I see myself writing right here instead of eating, though eating is good): 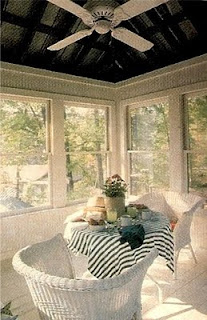 This is the dining room, which is off the galley kitchen. You can just see the kitchen in the photo of the spiral stairs. 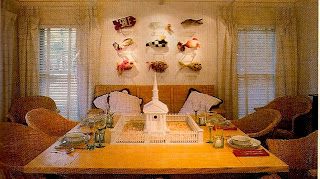 This is the spiral staircase which leads to the loft sleeping area, the lower tower room, and the stairs to the upper tower room, or as I think of it: Writer Heaven.

And this is the living room with a fireplace. 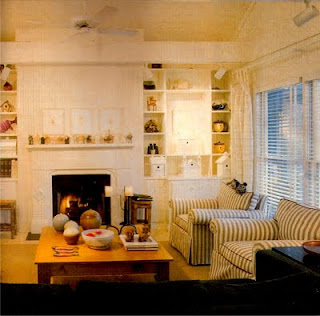 I'm telling you I LOVE this cabin. I feel the same way about it as I did about Roy Rogers somehow showing up and letting me ride Trigger when I was four. He had a daughter named "Cheryl," after all. If that could happen, anything was possible.
So there it is. My imaginary writer's cabin. Thanks for letting me share...
Posted by Cheryl at 11:09 AM

What a lovely cabin. I've dreamed of someething like that, too. Unfortunately, I'd probably need an elevator to get up there these days!