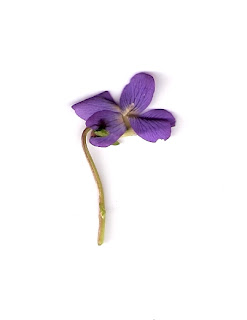 I love violets, and the violets have arrived. I know this because the dh picked one for me. See?

It's a little worse for wear. Something had been munching on a petal, and the stem is bent. But they're still a wonder to behold every "almost spring."

I think my attachment to violets is because of a locket my father gave my mother. There was a war on, and he was a young paratrooper trying to convince her to marry him. The locket has an important place in the family history, even more so now because it's been lost for many years.

But picture this: a 14k gold locket inset with mother-of-pearl. And placed on (not "in") the mother-of-pearl, an enameled violet. It actually looked like a real violet sitting there -- very detailed -- the petals even had the tiny lines in them. And there had an amethyst in the center. I got to wear it once -- when I was fourteen.

I've never seen another one like it. It was almost as beautiful as the note that went with it. "To the one I love," it said simply. I was quite impressed by it when I was a little girl. I still am, actually, especially now that I know he didn't tell her the truth about how old he was at the time -- because he didn't think she'd marry him if she found out he was four years younger than she was. He was very determined. Paratroopers are like that.

Anyway, I really like violets. Sometime we'll talk about my other favorite flower -- lilacs. And the lost ring.
Posted by Cheryl at 11:53 PM

Cheryl, my two favorite flowers are also violets and lilacs! We had both growing in our yard when I was a kid, along with Lily of the Valley, which I also love. Unfortunately, I live in the heat of Gulf Coast Texas, where none of these three grow. Thanks for bringing back lovely memories!