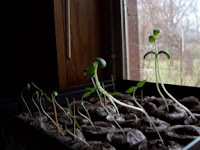 It's happened once again. Intellectually I know that putting one seed into moist soil, after a certain interval, equals one plant -- assuming the environment isn't hostile and the seed hasn't fizzled. But I'm always surprised. It remains ever amazing.

I thought I'd show you the sprouts (I know you're rolling your eyes, but it's my blog and stuff like this is what I do when I'm not writing. I could dust or mop, but I don't want to.)

So here they are -- Brandywine tomatoes in the foreground, larger, white cucumber seedlings behind them. No word yet from the okra on the back row.

The dh, who is a ham radio operator, tells me that he heard one of the gardener-hams in the mountains say he soaked his okra seeds in kerosene before he planted them. I had a dual reaction to this information -- What!? and NOW he tells me.

My gardening history and experience does not include petroleum products of any kind. Still, the seedling disks don't have even a hint of an okra seedling as yet, so I have an open mind. Because I like okra. I like it fried. I don't like it boiled unless it's in vegetable soup. I'll keep you posted as to whether or not either of things might become a possibility. (And stop rolling your eyes.)
Posted by Cheryl at 11:53 PM

I'm such a huge fan of yours, Cheryl, I hope I don't embarass you. I am really enjoying reading about parts of your life and your history and seeing how you've put them in your stories. Hope your orphans find a home soon.

Thank you, Kathie -- for your kind comments and for stopping by. (Still no okra seedlings and still waiting for the details re: the orphans...)