Back To The Depot

Here's what I've learned this week -- I don't have the stamina to be a "groupie," political or otherwise.

I was still on my movie star high when I learned that former President Bill Clinton was going to be at the depot today stumping for his wife. (Translation: I was ready to go stand and gawk again, camera in hand, even if I am a somewhat less than stellar photographer.) So that's what the dh and I did. It was more involved this time around, what with waiting in a long line, filling out a form, and showing those in charge of security that I had nothing on my person but a checkbook and a digital camera.

The speech was outside in the depot garden. The swallows were flying. The sky was blue. The weather was hot. And I ended up in a less than helpful location for a photographer, especially a bad one. I spent a lot of time taking "short-person" pictures, i.e., the backs of other people's heads. Should I continue my celebrity hound bent, I'm going to have start carrying a box to stand on. There was no handy wrought-iron fence this time.

There were, however, people around I knew. Like Tad, a former co-worker, and my friend, Deena The Poet. Deena was in an excellent location for taking photographs, and this is her effort, which she kindly gave me permission to display here: 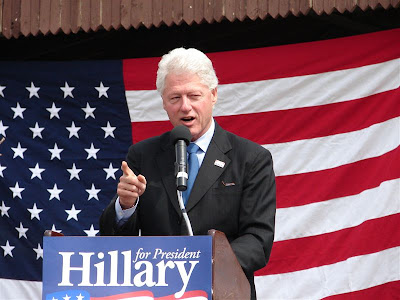 This is one of mine : 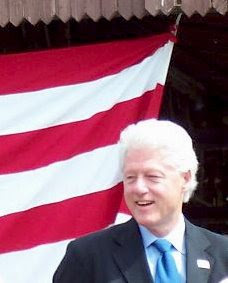 You wouldn't believe the amount of cropping I had to do to get rid of the heads, shoulders and ears in the way.

This is one of mine, too, and no, I don't know how this happened: 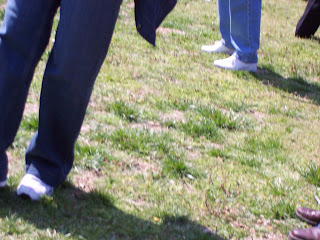 And here's some blue sky: 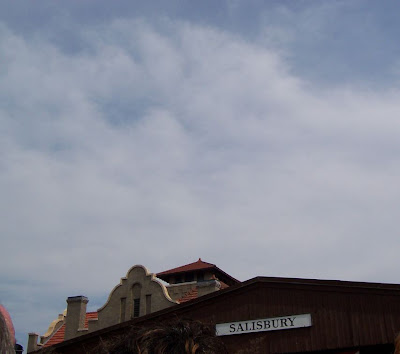 So that's how I spent my day -- gawking at history -- instead of working on the book proposal.
Posted by Cheryl at 9:41 PM

Seeing you again ranks right up there with seeing and hearing former President Bill Clinton. Only he is significantly taller. Even if he had not been perched on a platform he would have been easy to spot. Don’t sell your self short on your photography efforts. You have the promise of a budding paparazzi. Your George Clooney and Renée Zellweger shots made me wish I had ventured down to the depot to get a closer look. Who knows who the next major headline grabber will be to grace our fair town. See ya there!