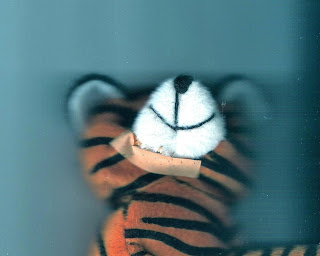 The latest Beloved Critter, immediately post-suturing in MawMaw's ER. (Detached muzzle, it was.)
It was all very traumatic, but as you can see, he's definitely smiling.
So what else is new? I finished reading Maggie O'Farrell's AFTER YOU'D GONE. Stayed up WAY too late doing it, but it's that kind of book. I just had to know WHAT ALICE SAW.
It's written in much the same style as THE WIVES OF HENRY OADES -- transition-free "soundbite-slash-tweet" prose only with more head, and verb tense, and time and place hopping. But it was immediately compelling and stayed that way. The writing is visual. The writing is emotional -- sometimes gut-wrenchingly so. And I very much appreciated Ms. O'Farrell's respect for her reader in that she didn't resort to the almost obligatory, literary "gotcha, you blockhead -- didn't see that coming, did ya?" plot twist at the end. (You know who your are. Okay, yes, I'm thinking of ATONEMENT. And maybe THE MAGUS, though pretty much all of that had the "You Blockhead" feel.)
Anyway.
The bottom line is that I truly enjoyed AFTER YOU'D GONE. I'm glad I found it. My only complaint is that I read it as an Adobe Digital Edition downloaded from the North Carolina Digital Library, and there were a significan number of typos.
Other news: My FAVORITE HOUSEGUEST is here. Once again, I'm working hard to keep him fed. He's way past the needing a Beloved Critter sutured stage ("Dot," the Beagle, that would be), but well into the Bottomless Pit one. (How can fifteen-year-old boys EAT so much?)
Till next time...
Posted by Cheryl at 12:08 PM No comments: 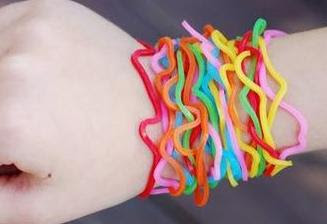 You're probably familiar with the shaped rubber band craze -- though I'm not sure they're actually made of rubber. My granddaughter is certainly into them. Her arm often looks like the one above.
But I saw something yesterday that made me smile. And elderly man dressed in an impressive dark gray suit, crisp dress shirt, silk tie. He looked very "uptown."
But what really caught my eye? Peeping below his sleeve was single, blue Silly Banz. It was so incongruous and so cute -- and immediately suggested that somewhere in his life, there is a little girl who loves him.
Posted by Cheryl at 11:23 AM No comments: 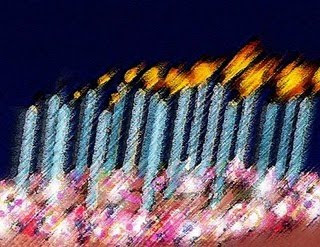 In forty-five minutes of so, No. 1 Grandson, a.k.a. Favorite Houseguest, will turn the big 1-5. I can't believe he's almost driving. Tempest does indeed fugit. (Or however that Latin phrase on the grandfather clocks goes.) All I know is he was toddler just the other day. (sigh)
See? 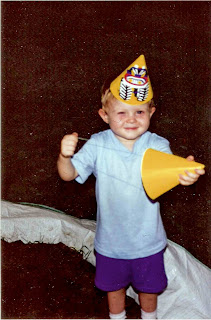 There is now an online amusement for writers and non-writers alike called I WRITE LIKE... where one submits a sample of one's writing and it is immediately assessed to be "like" whatever writer's writing it decides your sample resembles.

Yes, I know the man has made millions. I'd like to have his checks -- it would help my assorted loved ones to no end if I had a cash flow of that magnitude -- but I do NOT want to write like him. I can say that I admire his storytelling, i.e., the unusual premise of his Da Vinci book. But his way with words? Not so much.
You can click on the above link if you want to give it a whirl. 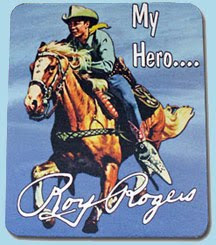 I just read where the Roy Rogers Museum in Branson MO has been closed, and they're auctioning off all the Roy Rogers-Dale Evans memorabilia. Apparently all his (and her) fans are too old or too dead now to come to the museum, and they couldn't keep it open any longer.
(re-sigh)
Posted by Cheryl at 8:09 PM 2 comments:

THE WIVES OF HENRY OADES -The Book With The Incongruous Cover 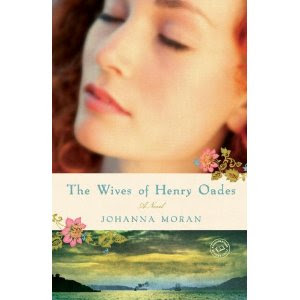 Don't let the dreamy lady on the cover fool you. She has little to do with the content and suggests nothing of the unusual and often journalistic-slash-Dragnet"Just the facts, ma'am" writing style, i.e., prose which is highly readable, perfectly suited to our "sound-bite" conditioned brains.
And neither does Cover Lady hint at the grittiness of the ordeals of the young and ambitious Henry Oades and the women he married or the subtle historical detail deftly inserted to add texture and a compelling verisimilitude. So forget the cover. It's the plot and the unemotional It-is-what-it-is delivery of it that's the thing.
I read the first half of the book in one sitting, it's that intriguing. It fit my criteria for a "good book." I like not to be able to anticipate the plot and I like to learn things as I go (I knew next to nothing about New Zealand's indigenous people and nothing at all about California's having had the death penalty for the crime of bigamy in the late 19th century) -- but I don't want to feel like I'm learning. I still want to be entertained. And for someone who likes poking around in history, the fact that the book is based on a possibly true incident is -- pardon the cliche -- icing on the cake.
The Wives of Henry Oades does lose some of its highly sustained momentum at the end, but it is still well worth your time. I definitely recommend it.
Posted by Cheryl at 8:59 AM No comments:

Labels: The Wives of Henry Oades 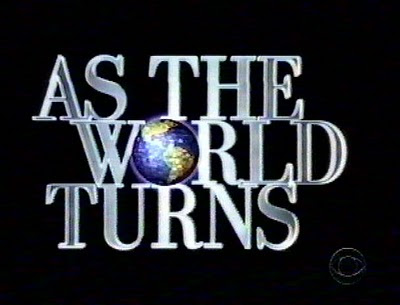 I was going to show you a video tribute to ATWT in honor of its September demise, but once it was embedded into the blog, it went all "Sorcerer's Apprentice" and wouldn't turn off.
Click on the above link if you want to see it on their website.
Regarding the cancellation, let's just say that I don't know quite what I'll do to fill those five hours a week. I do know I won't be watching a game show. Never did like those things...
Posted by Cheryl at 5:38 PM No comments: 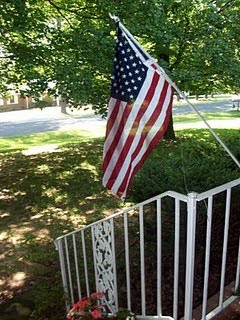 The Flag is out. The morning is a cool and breezy 67 degrees. Lovely.
I notice that Barnes & Noble is offering FREE eBOOK DOWNLOADS, i.e., "AMERICAN CLASSICS" until tomorrow, Monday, the 5th, at midnight. Here's the link if you happen to be interested. There is a CATCH, of course -- you have to have an account or you have to create one. Creating an account will involve giving them your credit card number. (Very sneaky of them, I say.)
Do have a safe and happy Fourth. I'm off to read the Sunday Salisbury Post...
Posted by Cheryl at 9:23 AM No comments:

(There has to be a good job out there SOMEWHERE...)
Posted by Cheryl at 3:28 PM No comments: