(The) Writing Life--Pesky Prologues or... 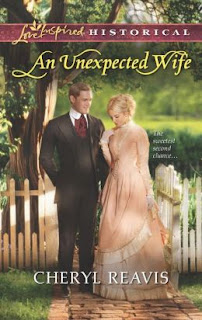 Do you like prologues? I like prologues. I freely admit, though, that many times they are more for me than for the reader. They help me "anchor" my sometimes misty idea of how we got to where the book begins. (I have a hard time "springing from the Head of Zeus.") And this may be why I will have had difficulty getting prologues past editors.

In any event, the latest prologue to end up in the iMac "Trash" was this one from  AN UNEXPECTED WIFE.

She kept her face turned away from the other women in the room, her body trembling with exhaustion and pain. The windows were open.  A cool breeze from an approaching thunderstorm swept over her, making the trembling worse. She could hear a murmur of voices—lilting Italian voices—and occasional laughter coming from the gardens below as the grounds keepers hurried to finish their work ahead of the storm. When she’d first arrived, she’d thought this place was a church because of the manicured lawns and the tall bell tower. And so it was—in a way. It had once been a nunnery, a house of piety for the faithful as well as a refuge for the ostracized and disappointed—women who had been forced to hide themselves away and thus save their families from an otherwise unavoidable scandal.  For all intents and purposes it was still that.

She could see flashes of lightning illuminating the room from time to time and hear the ensuing rumble of thunder, but the thunder wasn’t loud enough yet. She wanted—needed—it to be loud. She didn’t want to know what the women were doing, didn’t want to hear the soft mewling cry of the child she had just borne. A girl? A boy? She hadn’t asked, and no one was likely to tell her.

She didn’t know where her mother had gone. She supposed that it was better for them both that the midwife had banished her from the final ordeal of her only daughter’s accouchement. What a poetic-sounding word for her situation, she thought. French. There had been a time when she had loved studying the French language. She had worked hard to learn and understand it, almost as hard as she had worked not to understand the Italian spoken around her now. She was far too ashamed to wonder what the attendants and servants said about her.

She closed her eyes, trying not to think of the vast sum of money it must have cost her father—and perhaps John’s as well—to send her here.  She still didn’t know quite where she was despite the months that had passed. Italy, of course. Pesaro. But was it the town or the province? All she had been able to glean by eavesdropping on her parents’ conversations was that the former nunnery was run by a woman of great means who had once found herself in a similar situation and who now profited from the experience by offering a discreet haven for wealthy young women until an ill-gotten child could be born and conveniently removed from their otherwise impeccable lives.

She wondered how her father had come to know about this place, just as she wondered if John even knew she was here and if he had agreed to the plans made for their child. She doubted it. Her family honor was more at stake than his. He would have had even less influence regarding what was to be done than she had. It was likely that he was back at school now, his life unchanged, while hers…

A tear slid from beneath her tightly closed eyelids, and then another and another.

“Bambina povera,” the midwife said, reaching out to touch her on the shoulder and making her jump. She hadn’t realized the woman was so close. She turned her head sharply to see the opposite corner of the room where the other women still clustered, because she had understood the words despite her best efforts.

But nothing seemed to be amiss among the other women, and she suddenly realized that the midwife had meant her.

She began to cry in earnest then, sobbing loudly despite all she could do.

The woman made no effort to dissuade her from weeping. Instead, she brought towels, a basin, an ewer of warm water and some herbal-scented soap to the bedside. Silently, she began the long process of washing the ordeal of giving birth away, working slowly and methodically, despite the tears and protests, until the job was done and she had been forced to feel better whether she wanted to or not.

But the woman was not done yet. She changed the linens on the bed and helped her into a fresh white nightgown. Then, incredibly, she began to brush her long hair, humming softly as she dragged the bristles through the tangled mass of curls and ringlets that had once been a great source of pride despite her mother’s admonitions against vanity.

All the activity in the room abruptly stopped. The words hung in the air; she couldn’t take them back. She hid her face in her hands so that she wouldn’t have to look at the woman who had taken such pains to give her comfort.

“No, bambina,” the woman said after a moment. “You are a mother now. God relies on mothers. He may need your help someday.”

The woman abruptly turned and said something to the other women in the room. None of them responded. The command—if that’s what it was—was repeated, more firmly this time. After moment, one of the women came and took away the basin and the dirty linens. Another brought some pillows and helped her to sit up higher in the bed.

The woman who had bathed her crossed to the other side of the room and returned with a tightly wrapped bundle.

“Now,” she said, passing the bundle to her gently. “Hold your son while you can.” 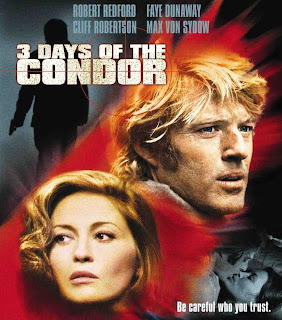 As someone who has pretty much given up on going to an actual movie theater to see a movie, I really love having Amazon Prime. There is rarely anything at Tinsel Town I want to see (most of the movies are geared toward the 18 to 35 year old male demographic), and if I do go, the sound is too loud--I've literally watched a movie with my fingers in my ears-- and people insist on talking (Huh. Maybe THAT'S why the sound is so loud.)

Anyway, I used to be a dedicated movie-goer. Started going when I was three just to see my beloved Roy Rogers. (sigh) But these days the aggravation cancels out any joy from the experience. So. Yesterday I cranked up the Prime and I re-watched THREE DAYS OF THE CONDOR (1975). Faye Dunaway and Robert Redford at their most beautiful. Loved her hair and makeup. His wind-blown look wasn't half bad, either.

I'd forgotten that the Christmas season was a subtle backdrop. There were no cell phones, of course, just Superman phone booths. Nurses were easily identifiable because they wore white uniforms AND caps, and some of it was filmed inside and around the World Trade Center. (Very sad to see that.) But the movie still held up. Why? Because of the then preposterous plot premise--which I had also forgotten--that some aspect of the US government wanted to invade the Middle East. Robert Redford's character, "Joe Turner," was shocked upon learning this. Me, this time around, not so much.
Posted by Cheryl at 10:16 AM No comments: