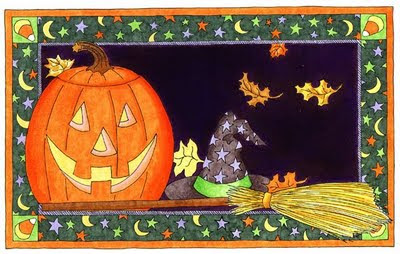 First of all, HAPPY HALLOWEEN! I hope you get lots and lots of candy. Candy is no longer in my personal food chain, but I don't begrudge your having it. Really. Even if it's Snickers or dark chocolate Hershey's Kisses. Or Truffles. Or Sweet Tarts. Or... (sigh)
Moving right along to family updating...
It's raining here today, a cold steady rain that's supposed to last through tomorrow. The dh is decorating the front porch for the Trick or Treaters. I'm here in the warm and dry with you.
Grandson No. 1 is doing very well with his chest brace. He's able to carry out his JROTC duties for the most part. He really seems to enjoy JROTC. I'm not sure why, but he does, blisters and all, braced or not. Could be the uniform. I understand the girls get all swoon-y and hug-y at the sight of it.
My son has the flu of some kind. He's seen the doctor and he's taking medications. He told me that at one point his abject misery was interrupted by a doorway visit from my granddaughter (who was also under the weather). She wanted to give him a very alarmed report on the video she'd been watching -- "Jack and the Beanstalk." "There was this really BIG giant," she told him. "And he said, 'Fe, Fi, Fo, Fum, I smell the blood of an English muffin!!!!!"
Which underlines what one of my clinical instructors used to tell us when I was in nursing school. No matter what you say, the person is going to hear it according to his or her own point of reference. It was very helpful advice -- even before I learned about muffins with a circulatory system.
I tried the South Beach Diet for six whole days. It was a terrible experience. Phase One severely restricts carbs, and I was really hungry all the time. ALL the time. The carbs in vegetables apparently aren't "carb-y" enough to keep my blood sugar at a level where I can function. Recommendations for this problem on the various websites were drinking a cup of milk -- which I can't do -- or eating an apple now and again. Apples worked nicely -- for about an hour. Between the hypoglycemic episodes (one near fainting one) and the significant headaches, plus the giant migraine of Day 2, it was hard going. So I bailed. While I could still get around. I'm not proud of it, but there you are. Besides all that, I didn't lose an ounce. I have friends who thrive on this diet, but clearly, The South Beach People are not going to want me as a spokesperson.
That's it for this time. Bulletins as they happen...
Posted by Cheryl at 1:16 PM No comments:

THE UPS AND DOWNS OF BEING A WRITER...

Or: How Wendy, The Super Librarian, Made My Day and How THE WRITERS' NETWORK (in North Carolina) Totally Ruined It. 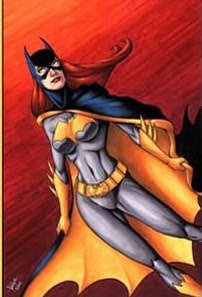 On her The Misadvantures of Super_Librarian blog today (October 16, 2009), Wendy posted her personal list of the top 16 romance novels (in no particular order).

I don't often read my own reviews (unless someone tells me I ought to), but I do like to read reviews in general, especially when they're done by someone as astute and knowledgeable as Wendy is. So. I wandered over to her Bat Cave this afternoon, looking for said reviews to peruse, and there was her list.

I am very pleased to report that I am on it. Twice.

Which brings us to THE WRITERS' NETWORK.

A couple of months ago I entered a Short Fiction Contest. One could submit a short story or a chapter of a novel, 5000 words or less. I entered a chapter from a WIP novel, the prologue actually.

While I was still reading Wendy's Truly Wonderful and Incisive List, the dh came in with the mail, which included, I'm sorry to say, The Loser Letter.

This is what it said: 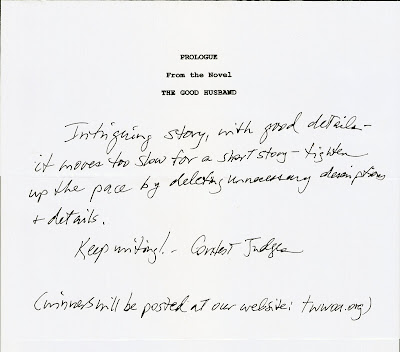 Do you see the identifying information? That it's a PROLOGUE from the novel THE GOOD HUSBAND?

And can you read the handwritten part: "Intriguing story with good details -- it moves too slowly for a short story..."

I don't like losing under any circumstances, but losing for this reason is most annoying. It's like entering your best beagle in the dog show and finding out it lost because the judges think it's a chicken.

Very soon I will consult the grandchildren for an appropriate epithet to call these so-called contest judges, but for now I'm going be good.

Instead, I think I'll give the dh the opportunity to redeem himself for delivering such a letter by taking me out to eat.

(Always lose with dignity, grace, and fine cuisine, that's me.)

As I may have said before, I just love little girls -- probably because I used to be one. My grandchildren have a hard time with this concept, but it's true. Really.
See?

My appreciation was reinforced yesterday when I dashed into the CVS Pharmacy to get the Vitamin D supplement my doctor had recommended.
A little girl, who I would guess was around four years old, and her mother were walking down the makeup aisle. The little girl stopped suddenly and cried, "Mommy! Look! Look! We have to buy some of this so we can decorate!"
Personally, I am very fond of "decorating." Nothing cheers me up better than a new lipstick or an eyeshadow -- and usually for a guilt-free price. I did once buy a Lancome lipstick, which, as lipsticks go, was the absolute best I've ever used. It was also the most expensive. I still sometimes look at them longingly when I'm in Belk's at the mall (brown family with rose undertones -- be still my beating heart), but thus far my credit card has stayed out of mischief. I just can't bring myself to spend that much money to "decorate," even if it does do wonders for my psyche.
Anyway, the little girl in CVS made me laugh, so I thought I'd share. It's hard to find even smile-worthy moments these days.
Till next time.
Posted by Cheryl at 11:39 AM No comments:

These Are A Few Of My Favorite Things... 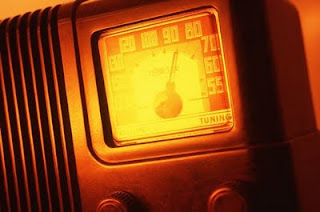 Well, one favorite thing actually. (My ducks are still all over the place and not likely to organize anytime soon, so I thought I would just forget the ducks for a while -- or try to -- and share this with you.)
My favorite online radio broadcast site: BBC 4
I've said in a previous post that I grew up listening to radio drama and that that is part of the reason why I like my local library's audiobook digital lending program so much.
Well, BBC 4 has raised the art of non-visual dramatization to new heights. They are truly skilled at making you "see" what you can't actually see at all, not with smoke and mirrors but with fine actors, skilled sound effects technicians, wonderful writers, producers, etc. Some of the actors you may immediately recognize, like Shirley Henderson ("Moaning Myrtle" from the Harry Potter movies.) Her droll reading of a modernized fairy tale was hilarious.
The above link will take you to their "Drama" page. There is plenty of other programming, but "Drama" is what I like best. I've especially enjoyed the "Book At Bedtime," fifteen minute installments, 5 days a week, of an almost always entertaining novel I'm not likely to read.
There are also plays, "readings" (non-fiction books and short stories). There are mysteries, comedies, and the classics -- I'm listening to the production of Beau Geste at the moment -- and bestsellers like The Help.
Try it sometime, especially if you've never experienced real radio drama. It's a whole new world. For those of you who've had the radio experience, you'll be amazed at how the BBC has improved it.
Now I'm off to wrangle my ducks some more. Or maybe I'll drink some iced tea and watch The Good Wife....
Posted by Cheryl at 9:12 PM No comments: 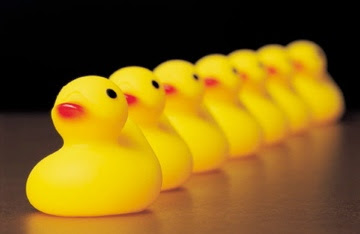 I've been trying to get my ducks in a row. Unfortunately, my ducks don't look like these ducks, and aggravations abound.
More later...
Posted by Cheryl at 9:01 AM No comments: