I'm taking you with me to see my ballerina. And fortunately, while we may be sitting in the vicinity of "Mr. Dursley" and his two (TWO) "Dudleys" again this year, we are three rows behind him and therefore cannot hear his running commentary despite the empty seats. (Believe me. This is a blessing.)
Are you ready? Okay. Click the "Play" button. My ballerina is the first one on the right.
(Isn't she wonderful?)
Posted by Cheryl at 2:55 PM 1 comment: 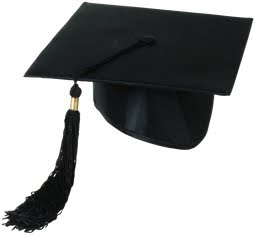 My baby graduated on Saturday. I would show you some pictures but I managed not to get any. At all. And not from lack of trying, I assure you. I should get paid to test these "idiot proof" digital cameras because I am clearly cursed with the inability to get any photos or videos whatsoever with those things. (sigh)
So let me tell you about it. The thirty-minute drive to the events arena where it was held was beautiful. We took the scenic route -- very lush countryside because of the recent rain. I saw a large hawk along the way and a dead copperhead or two in the middle of the road. We traveled thorough open farm country, and the corn in Stanley and Cabarrus counties is looking good.
The arena sound system was a challenge. There was enough of an echo so that most every word said at the microphone was completely unintelligible. It was like going to a graduation in a foreign country and not speaking the language. There were around 700 graduates, so this made for a LONG ceremony. I couldn't understand my son's name when it was called, but I could recognize him. Hard to miss him -- he's close to six and a half feet tall. I bawled, of course, and I bawled when they played the national anthem. I just can't get through that song without crying. Too many veterans in the family, I guess.
Anyway. He's finished with school. I'm proud and happy. Now. Does anybody want to hire a new IT grad with years of experience? Please?
Posted by Cheryl at 8:00 PM No comments:

I've been in the movie star photo collection again. I thought I'd show you these. Notice that all four of these pinups suggest real women who are beautiful -- as opposed to nipped and tucked plastic "Barbie" doll clones who don't look real at all and who all look alike. I notice the clone thing seems to have taken over country music as well.
But...whatever...
This is Esther Williams, the star who swam a lot in all her movies: 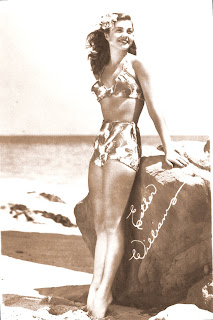 This is Evelyn Keys of Gone With The Wind fame. She played one of "Scarlett's" sisters: 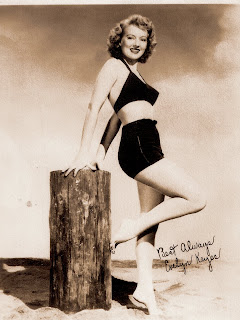 This is Jinx Somebody. It doesn't say and I don't recognize her: 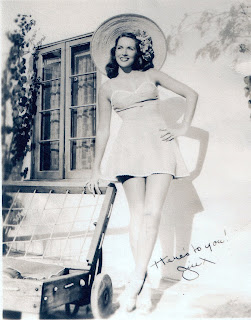 And this is the beautiful but sad Rita Hayworth caught up in some kind of fabric: 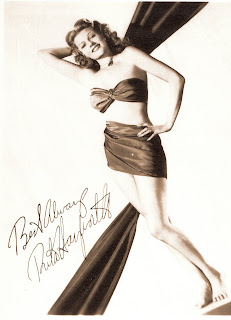 And that's it for this time...

Posted by Cheryl at 2:37 PM No comments: 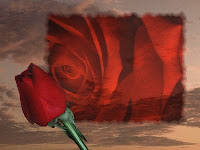 Positive thoughts and prayers for Deena the Poet who is recovering from surgery.
Posted by Cheryl at 7:42 PM No comments:

I took my mom out for lunch. The dh took me. My son took my daughter-in-law and the kids. What a handy thing that we were all going to the same place -- the Classic Restaurant in Denton. (This would be the one with the 60-foot buffet of country cooking and a pizza and salad spread -- the "picky eater" in the family didn't stand a chance.) Suffice it to say, the day was beautiful, and the meal and the company, excellent.
On the way back, we swung by Matton's Grove United Methodist Church. My mom had mentioned that she wanted to see it, and it wasn't all that far. My grandfather had told me about the church some years before he died, the fact that we had "people" buried there. I had been there once on a "roots" quest years ago, and I wasn't sure I could locate it again, but I did. When my mom saw it, she remembered that she'd been there at some point in her childhood, but she didn't remember with whom or why.
This is the "old" church, the one in her memory. It was built in the 1890s and it's no longer in use. See what a bright sunny day it was? 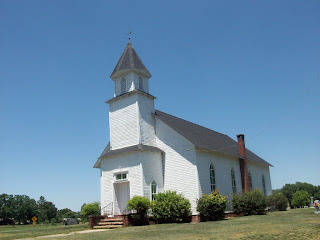 The first grave I located was that of Elizabeth Plyler, my great-great grandmother. I don't know what her maiden name was. It's not on the headstone. 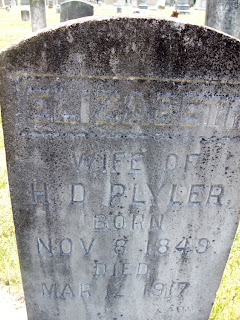 And this is my great-great grandfather, H(enry) D(avis) Plyler's, grave. I'm told he was called "Davis," and not "Henry" or some other unofficial name. My no-greats grandfather, by the way, is a prime example of the Southern custom of having "unofficial" given names. His actual, birth certificate first and middle names were "Norman Brown." People outside the family called him "Gene," and they undoubtedly believed that that was his true name. My grandmother, on the other hand, called him "Bill." No one knows why because no one thought to ask. Anyway, my grandfather, Norman Brown Gene Bill, said that his grandfather, H(enry) D(avis), liked to entertain the grandchildren by counting in German. 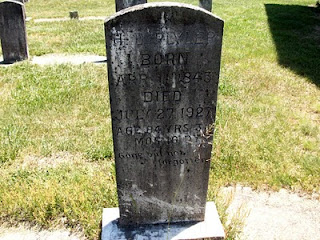 And this is the backside of H(enry) D(avis) Plyler's headstone. The iron cross thing signifies that he was a soldier in the Civil War -- the losing side, that would be. As I recall, his regiment had a very straightforward name that would leave little doubt as to their true intent: The Stanly County Yankee Hunters. 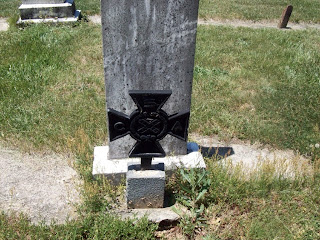 From the mid-1700s onward, there was a large German settlement in this part of North Carolina -- it's the area I used as the setting for my novel THE BARTERED BRIDE. All the surnames I happen to notice in this particular cemetery were German, except for one -- "Smith."
And that's it for this time...

Posted by Cheryl at 4:19 PM No comments:

Blame it on the rough winter. I can't seem to stop taking flower photos. How do you like this one: a purple iris and a purple iris. 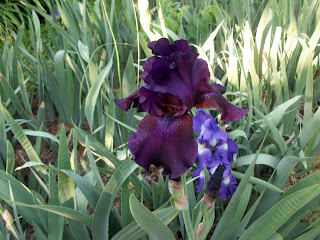 A close up of yet another purple iris -- with raindrops. 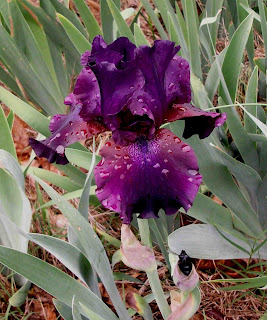 And one of the dh's late Aunt Peg's peonies -- closed. If you look closely, you can see a number of ever-present ants on it. Ants love peonies -- I assume there's something very sweet therein. Once, in a book I was reading, the female protagonist cut a bunch of peonies and took them straight into the house. It was most alarming and jerked me completely out of the story. I couldn't help but be immediately focused on the fact that she was going to have a host of uninvited guests all over her dinner table. (I assume the writer had no actual peony experience. Or maybe it's only Aunt Peg's variety of peony that attracts them.) 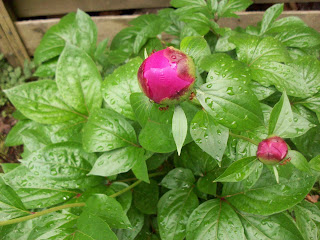 One of Aunt Peg's peonies -- open. 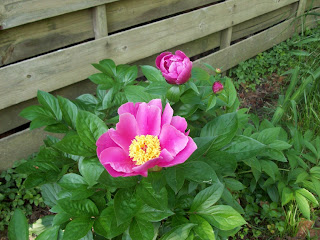 And one of Mammaw Rose's roses. I rooted this one from a cutting -- which is a miracle on SO many levels. (Let's just say I did not inherit my father's green thumb.) But here it is. Alive. And -- wonder of wonders -- blooming. It even smells like a rose. (I did good, didn't I?) 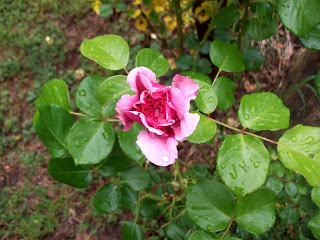 That's it for this time, except to say "Happy Mother's Day" -- and not just to those of you who are mothers by birth or adoption. If you've ever made a child feel better with a hug, or a smile, or a kind word, you're definitely a "mom." It's your day, too.
Posted by Cheryl at 2:59 PM No comments:

Want To See This Year's Irises?

The trusty iMac is on its last legs and crashing constantly -- or freezing, as it were, something unusual for Macs in my experience except when they're circling the drain. It's got a reasonably new hard drive and its OS has been wiped and re-done, upgraded, etc., etc. But it still freezes, which is supposedly better than the dreaded and very scary "Curtain of Doom." I'm not sure why. Either way, the thing don't work.
Anyway, under the threat of the iMac's impending demise and being off-line until I can afford another one, I thought I'd take you for a quick walk to see the currently blooming irises. I wanted to get a photograph of the black ones, but they're not open yet.
Here are the ones that are open: 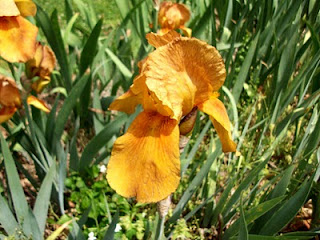 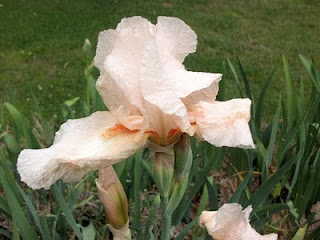 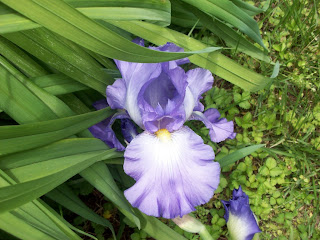 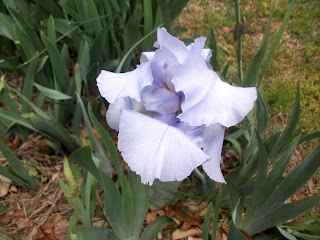 Posted by Cheryl at 2:32 PM No comments: 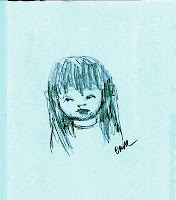 I still get all perplexed sometimes -- the way I did when I was a little girl. Not dumfounded exactly. Just wandering and wondering "in the dark."
This morning it's regarding the apparently new trend in newspaper wedding photos. Again. I simply can NOT appreciate these bizarre poses. I'd show you, but I don't want to get sued, so I'm going to give an opinionated description instead.
Picture this:
The kohl-eyed bride with the 1000-yard stare. (What is this child thinking?) The ubiquitous strapless wedding gown. The pose.
She's leaning against a wall -- some kind of wood paneling, I think. She's there, the wall is there, but something is off, wrong, inconsistent. What is the world that? Oh, I see. It's her arm. It's been forced behind her head in a way that makes a former medical person like myself immediately think "Yikes." (I'm assuming that it's not up there all the time.) The fact that it takes so long even to realize what it is should suggest the awkwardness of the position.
So the bride's arm is up behind her head -- which would ordinarily give anyone looking at the photograph a wide-open view of her armpit. Not to worry, though. In the armpit has been carefully placed a big bunch of roses. No, she's not sprawled on the front seat of an automobile or on a dirty stone floor with dead leave strewn all over her wedding gown as other brides have been. Yes, I know it's her (their) prerogative. It's her (their) money. Still, it does resurrect the question posed earlier.
What is this child thinking?
Till next time...
Posted by Cheryl at 9:16 AM No comments: