There are fans -- the reader kind who will buy one's books, read them, like them, and say so. Those are without a doubt a writer's greatest treasure. But this is about the other kind of fan -- the ones that fall under "memory keeping."

My personal experience with what is sometimes called "air conditioning on a stick" is confined mainly to "church fans." For the youngsters in the crowd, there was a time when neither public buildings, nor private homes, nor businesses, nor vehicles were artificially cooled. One flung open windows and coped the best one could.

In churches, in the hot summer time, one of the ways of coping was to use a fan that was always left in the hymnal holder on the backs of the pews. (I'm sure the hymnal-holder thing has a name, but I don't know what it is.) Basically, they were religious pictures printed on thin cardboard and stapled to a scalloped wooden stick -- with an advertisement for the local funeral home on the back. That, in itself, was on the high side of disconcerting.

But these aren't the fans I mean, either. The fans I want to talk about are the ones found in my late sister-in-law's personal effects. This is one of them:

This is the Cuban fan I mentioned in a previous post. I could see immediately that it was different -- and special. It's silk, for one thing -- gilded silk. The ribs aren't bamboo but some kind of heavier wood, and the "Made In Cuba" imprint on one of them would indicate that it's pre-Castro regime. But who it might have belonged to and how it came to be here is the question -- an intriguing one for the "writer mind." 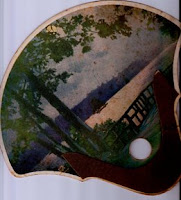 Here's another one -- with a thumb hole instead of a stick. There is an advertisement for the Marshville Furniture Company on the back which proudly proclaims: Furniture Dealers and Funeral Directors. I wonder how that worked? And wouldn't you feel odd giving both those things as your job description? Apparently not. This fan was "Made In The USA" (imagine that) and it has a patent date: 2-15 and 2-23.

It's pretty clear that some of these fans relied heavily on the power of suggestion. This one shows a cool, moonlit summer night. There's a sailboat on the water -- so you'll know there's a breeze coming off the lake. Very atmospheric. All it needs is frog sounds and fireflies -- and the ability not to dwell on the furniture-funeral thing.

This is a three-piece, hinged cardboard fan, clearly designed to make you feel the cold. The sun is sinking. The trees are bare. The snow is on the ground -- but in the distance, home, with a wisp of smoke curling upward from the chimney. There is no advertisement on the back of this one so I doubt it was a "freebie" from a place of business. Maybe you could buy them at a five and dime. I remember seeing the paper and bamboo Japanese fans at Woolworth's when I was a little girl.

But however they were made, and wherever they came from, the bottom line is that they actually moved air well enough to make you feel better. A good thing, as Martha Stewart would say.


And that concludes our foray into Memory Keeping for the day. We'll do it again sometime...
Posted by Cheryl at 11:08 AM