What the Writer Saw...

(And this was a double-take.)

Man. A portly man. With a white beard and white hair. Wearing khaki cargo shorts, a sweater, and off-white, wool-looking knee socks with very sturdy shoes.  And a tam o'shanter. (A what?) One of these:

He was sitting on a bench. In Walmart. Reading. What may have been an eBook reader.  (I really was trying not to stare. Or bring out my cell phone and try to learn to take pictures with it then and there.)

So who do you think he could be, this man who seemed to be more in costume than is de rigueur even for the Walmart Superstore?

Could it be Santa MacClaus, checking his list for who's been naughty and who's been nice?

Who else would sit in Walmart foot traffic, trying to read and looking like the Kris Kringle fresh from the Royal Troon links?

Whatever the answer, it made my shopping trip. Haven't had one that interesting--especially in Walmart--in a LONG time.

Posted by Cheryl at 4:33 PM No comments:

HAPPY THANKSGIVING, EVERYONE!
Posted by Cheryl at 4:28 PM No comments:

My sister, on her way here to visit, made her husband turn around so she could take this photo. I think I can understand why. When is the last time you saw a giant Brahma bull dressed up like Rudolph, the red-nosed reindeer--with Santa Claus riding on his back?

I know. But I guess it beats the meat aisle at Walmart.

Merry Christmas. (sigh)
Posted by Cheryl at 3:08 PM No comments: 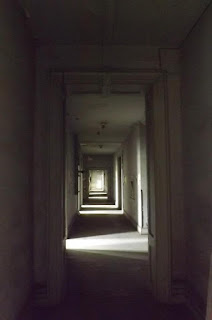 Come take a photo tour of the historic Empire Hotel. The 1855 section had a "walk on" part in at least one of my historicals, i.e., THE BRIDE FAIR. I keep hoping somebody will step up and save it. I thought for a while it would actually happen--an honest to goodness restoration. But then that fell to the wayside in the wake of the Wall Street shenanigans.

Click here to see the interior.
Posted by Cheryl at 10:44 PM No comments: 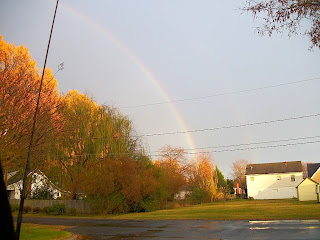 An unexpected pleasure on a trip to the F&M Bank yesterday. This was taken from the bank parking lot--the trees are gorgeous, aren't they?

On the left, through the trees, is a house I often when to with my dad when I was a little girl. The man who lived there and my dad were both "dog men." ("Dog men" have a lot to talk about.)

The two-story white structure on the right is a small apartment house behind the two-story stone house that used to be Dr. Oliver's medical office. (Had to go there more times than I like to remember.) The big stone house is still there, but I'm not sure what, if anything occupies it.

On the far, far right--completely out of the frame--is the house that belonged to a woman who lost both her sons in WW II. I believe her name was Mrs. Holshouser. Even though she's long gone, I always feel sad when I see it. Not so much at that particular moment, though. Rainbows help with things like that.

And this concludes my Rainbow Connection for this time...
Posted by Cheryl at 3:05 PM 2 comments: 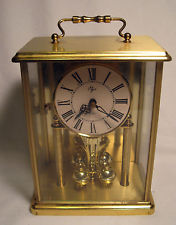 I've been tinkering with the anniversary clocks--two of them, both of which chime like clockwork, but mostly not the right number for the hour it happens to be. For example, one chimes twice when it's 10 AM and not at all when it's 10 PM. The other one is just as numerically challenged, although both of them do just fine if it happens to be 12 noon or midnight. It's been that way for years. Suffice it to say, if you want to know what time it is at my house, do NOT count the chiming.

Anyway, as I said, I've been tinkering, not because I intended to do something about the mismatched chimes, but because I had to reset them AGAIN thanks to that Fall Back/Spring Forward nonsense. (No, I don't like Daylight Savings Time. The only time I liked it was when I was 10 and NC didn't participate in the practice, so all the television programs came on an hour early. I got to see all kinds of  programs I'd never seen before and I LIKED it.)

But I digress. I finally got around to resetting the anniversary clocks, only to find one had stopped running altogether. New batteries should have taken care of that, but didn't, so I tinkered. And fiddled. And tinkered. I got the thing running again, but it wasn't chiming. And then it was chiming, and not only was it chiming, it was chiming the right number. And somehow so is the other one, the one I didn't tinker with except to run the hands forward until it was an hour earlier.

Imagine that. Clocks chiming ten when it's ten and two when it's two. It's nice. I like it.

It makes me happy. 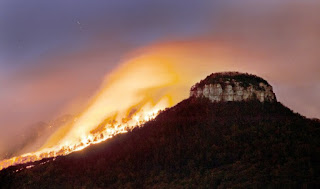 Apparently State Park personnel tried to burn down Pilot Mountain. (Mount Pilot of Andy Griffith Show fame, that would be.) It was one of those "prescribed burn" things. I heard someone comment that people and the media were just "overreacting." I once stayed with a very nice Pilot Mountain woman when I was a member of a classmate's wedding. This was the view from her front door--without the flames, of course. If she still lives there, and not being a total idiot, I imagine she's been "overreacting" quite a bit.
Posted by Cheryl at 3:34 PM 1 comment:

Giving my humble thanks to veterans everywhere, and especially to "my" veterans, many of whom who are no longer here:

and all the men from my childhood who answered the call when their country needed them. I was a little girl who grew up surrounded by heroes who did their duty, and I am all the better for it.

Posted by Cheryl at 9:11 AM No comments: 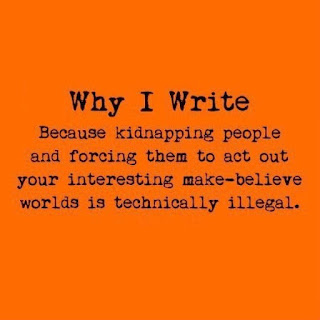