The Cadet Diary #6 --The Ash Can "Mistery" Is Solved 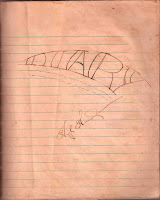 Washington’s Birthday and here I am all cooped up in this place. No kind of inspection at all today. Lounged around the room all morning and was over in the gym about 5 o’clock when the first call went off in Murray Barracks. Put on my tie and overcoat and ran over here. Just did get here in time to meet the 2 minute steel(?). Now I know how it feels to be a fireman. Drop whatever you are doing and be on the guard – fully dressed in three minutes.

They announced that general leave would begin immediately. They had been having a cadet Committee meeting and had evidently caught somebody -- Moss got back from the dentist about that time and said that Muldrow and Dukes had confessed. He said that they had all got together and drew straws to see which two would confess so the corps could go on leave.

Tried to take a shower but the water was to (sic) cold so I waited till about seven o’clock and it was still cold.

Went up town and had supper at the G. and S. by the lonesome. Bought a few odds and ends that I had been needing including some rubber caps to go on the bottom of the chair so I wouldn’t fall down when I leaned back. Went down to Silver’s to see about that lamp. It’s a pretty good looking job (Transcription Note: girl) that works in there. I’ll have to get a date with her.

Came on back about ten o’clock and went to bed. Oh yes I forgot to say that was Kendrick’s liquor they found in Dial’s car. He read out his own special order Thursday. He was reduced from captain adjutant to private and is deprived of all leave privileges for three months receives 50 demerits and 50 tours. Thats (sic) going to seem odd having a senior on the quad with you.

Eyes are almost well now. They had another cadet-committee meeting during and after chapel this morning. I think they’ve about got them all now. They say that Kendall told on all of them.

Didn’t get back from the hospital until class call this morning. Moss didn’t have the room cleaned up very well, but he had a vacant period before the OD came by and got it fixed then. Trotti pulled me for having on a dispreptable (sic) shirt at drill. Thorpe saw it at dinner formation and if he didn’t tell Trotti to report me, I’m going to star it and say I toe it while doing exercises. It’ll probably be a 3 and that will give me a tour to walk Saturday.

Andrews says he is one over on demerits now, but he had a neat press today so he’s exactly even now. He had sure better watch his step.

Went to Chem. Coaching class tonight and worked a few problems . I’m going to have to do some powerful studying now since I haven’t read any at all in a week. I’m also afraid we have to hand in the History note book tomorrow and I haven’t touched mine this month or the last either

Didn’t get back from the hospital until after class call again. Got pulled for unidy press, but I starred the report. Got a letter from Jeane and Harry (Transcription Note: Harry is likely a brother) this morning. Jeane says she found that letter I wrote her last October. Harry says Burke had his tonsels (sic) taken out.

Mr. Dial got reported for disrespect to Shumate. He wouldn’t say “sir” to him and when asked for explination (sic) he said “I’m not used to saying sir to anyone that is no older than I, and I don’t intend to start now.”

Took part of the test in English this afternoon. H (?) Achurch (?) H A Church (?) started to correcting it and said I had so many errors that I could have another shot at it Thursday morning. I’ll have a class from 9 in the morning till six in the afternoon with an hour off for dinner and supper. Slept all evening and went to coaching class after supper.