The Cadet Diary #7 -- The Final Entry

I lost the diary for about two weeks is the reason I haven’t written in it lately. I mooved (sic) down with Ashton this Saturday 2 weeks ago. Thank God I’m not rooming with Moss anymore.

Got my glasses last Friday afternoon. They still hurt my eyes a little bit, even though I just wear them when I read.

I got sick last Wednesday nite a week ago and stayed in the hospital until that Saturday morning.

The General inspected Saturday. We didn’t get pulled or commended.

Went sailing with Mr. Frazer (?) yesterday. Lift (?) Sift(?) Lif 1 (?) about. We left about ten thirty and sailed under the bridge to the Yacht Basin and got some sandwiches to take with us. Went on out to Fort Sumpter and stayed out there for about a half hour and then sailed out to Morris Island and beached he boat. Had a fine time playing on the beach and looking at the jetteys (?) jetlays (?). Sailed back before the wind in about 2 hours. That’s pretty good time because its (sic) about 14 miles out there.

I am pretty sunburned in the face.

Thus ends the Cadet Diary -- and what a journey it must have taken. I know only about the last leg of it, that it went from here (Cline's Antiques): 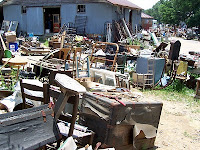 To here (my AlphaSmart typing place by the fire): 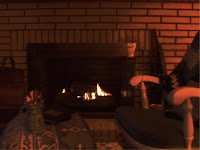 Thanks to the internet (I speak fluent "google"), I've managed to discover a few answers to my earlier questions. I know that at the time the diary was written he looked like this:

I know that he did indeed graduate and that the 1939 Citadel yearbook said this:

...Hugh will always be remembered for his dry, humorous expressions. His slow drawl and nonchalant manner have made him almost a legend among his classmates. Never seeming to care for rank, he has been a private all the way through. If he had really set his heart to the task, Hugh would probably have made an excellent officer. The height of his ambition was to be able to know more songs and recognize more orchestras than his crony "the Beetle-brow." Therefore, if anyone wanted any information in the musical circles, Hugh could always oblige. No one ever saw this lad from Charlotte studying, but he met the demands of the Business professors. His keen intellect and friendly personality will no doubt be as useful to him in the business world as they have been at The Citadel.

I know he was born on the 30th of June in 1918 and he died on the 11th of March in 1997. I know that he had three older brothers and that at some point he got married. There was no information regarding any children.

I find it interesting that he didn't seem to care about the military aspect of the Citadel, but he doesn't seem to be quite as firm about not wanting to participate as did one of his classmates, who, the yearbook noted, was given a promotion -- and who promptly gave it back.

I learned, too, that the seemingly hapless Colonel Gaston (I base this opinion on the fact that oranges were thrown in his direction) had been replaced by 1939. There was a special mention in the year book of the "new regime" and the fact that Colonel Gaston had "retired." These changes apparently had the cadet senior class's approval:

...School reopened under a new regime. Colonel Holliday, P. M. S. K T., replaced the retired Commandant of Cadets, Colonel Gaston. With the new commandant came a new set of Assistant Commandants, Major Kalloch. Major Sinkler, and Captain Alexander, replacing Lieutenants Graves and Keith. The new Commandant's Department wisely realized the futility of functioning without the Corps' backing, so the Senior Class' cooperation was secured. We were given more responsibility and more liberty,the things for which all Citadel senior classes have striven. We feel that this administrative change has done more for our college than any amount of physical growth could do.

So that's it. As suggested at the top of the blog, "writing Life" is my thing -- but I didn't necessarily mean my life. I hope you've found the long ago cadet's observations interesting. I certainly did.

Cheryl, I will miss the handsome young cadet and his southern charm. Even before you told us he had a slow drawl, I could hear him speak. I would like to imagine he did not marry the good looking “job” he saw at Silver’s. But instead was caught unguarded by another “job”. Thank you for sharing this chapter in his life. I hope to meet him again some day.