The Mystery of the Cadet Diary - "Memory Keeping" 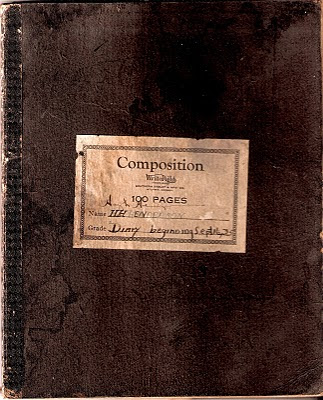 The dh found this diary at Cline's Antiques on Highway 49, which is located not too far from Pfeiffer University. For those of you not familiar with the place, if the Smithsonian were a junkyard, it would look like Cline's. It's amazing what you can find there sometimes just by riffling through the right box.
I have now read the diary in its entirety. I know the diary-keeper's name. I know the dates it was kept - September 1935 through March 1936. I know that he referred to his father as "pater" and to girls in general as "jobs" and that he was a cadet in a military school.
But I didn't know what military school. He never mentions it by name, but there were clues - Murray Barracks, sailing to Fort Sumpter, a fellow cadet named "Trotti," a nurse named "Miss Malloy."
A Google search revealed that there was and is a Murray Barracks at the Citadel. There is also a Citadel alumnus on their list of War Dead named "Trotti," a marine LTC from the Citadel Class of 1937 who was was killed at Iwo Jima during World War II. I was even able to find a scanned page from a 1939 Citadel year book which mentioned a nurse named "Malloy" on the school's medical staff. The cadet also mentioned a Colonel Gaston and a kind of small mutiny against him during which some of the cadets yelled insults and threw oranges at him. Unfortunately, a search for his name and the Citadel didn't show any Google results.
What makes this brief diary so intriguing to me (aside from the orange-throwing) is the observant and matter-of-fact way it is written. The cadet who wrote about his rigorous school life wasn't given to self-pity. Yes, he was annoyed sometimes, sometimes exasperated, sometimes out and out angry (the size of his handwriting changes accordingly), but there is still that pragmatic undercurrent: It is what it is.
The diary is also a window to another time, an insight into how we, as human beings, don't really change. In his day he was trying not to get caught listening to a crystal radio set instead of an iPod. And, like the present, young men ogled girls and some of them got drunk and misbehaved if they could.
What I don't know is what happened to him. Did he pass the courses he was worried about? Or did he leave the Citadel and that is why he stopped writing in the diary? Did he eventually graduate? Did he serve in World War II like the fellow cadet from the Class of 1937 named Trotti? Did he ask the "good-looking job" he saw clerking in a store for a date as planned? Is he still alive? I'd like to know what happened to Colonel Gaston, too, what kind of man he was that mere cadets would dare hurl epithets and citrus fruit at him.
I think I'll be posting some of the diary entries -- so you can wonder, too. 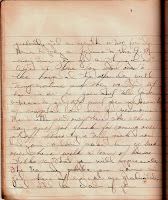 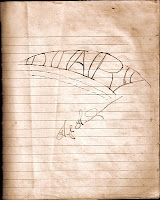 Do you still have this diary and if so, is it for sale?
Ginger Morton
G-NIECE of Tom Mulloy Trotti
Chesterfield SC