The Mystery of the Cadet Diary #3 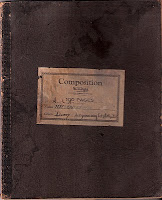 Continuing with entries from the mysterious cadet diary:

Went to Chapel this morning came back and lounged around the room till dinner. Got a letter from Clarence this morning. After dinner I went down to Belcher’s room at (sic) shot bull till about four and then went to sleep.

They had an amateur show this afternoon. A boy named Purcell won it. Mr. Sturkey says that he and I are going to enter the next one. He is going to be a magician and I his helper. He is very confident that we’ll win it. I know 3 bucks would certainly come in handy.

I’m getting pretty damn tired of this place. The more I think about it the madder I get. There’s not one single thing down here that I’m satisfied with. Can’t get in the hospital even if you are sick – let the laundry lose all your clothes and you can’t say a word about it. Cuss that lady that runs it out and probably get a month or two for it. Have to pay a fortune to the G.M. every time you get anything and like it. One boy went over to the hospital the other day with temperature and they wouldn’t let him in so he goes and tells Gaston where to get off and up town (?) to a hospital. Now he’s got pneumonia. Mr. Trotti (Transcription Note: There is a Tom Mulloy Trotti, Citadel Class of 1937, on the Citadel War Dead List. He was killed at Iwo Jima during World War II and I am assuming that this is the same young man) went over there the other day and got stuck for coming over at off hours. He’s truly sick now, but you couldn’t make him go back over there with a team of horses. Folks say you will appreciate the training (Transcription Note: the words “while you” marked through) you get here after you are graduated, but I’ll be damn if you do now. I dare say there are about fifty freshmen out of 200 that intend to come back next year. I know I Sure (sic) will hate to see September roll around again.

I’m forced to knock off and write to the pater and Clarence and Jeane too if I can borrow any stationery.

Got a hair cut this afternoon. Shumate came in tonight and stuck me for loud laughing during E.S.P. and clothes strewn around room during E.S.P.

Made 88 on an English quiz - not bad. Was down in Richter’s room this afternoon and some boys were scuffing and making a lot of noise. Mr. Sturkey came up then (?) there (?) and jumped on them and got mad at me because I didn’t come to attention. He says to bring my broom with me when I come down to fix his bed at tattoo.

So for this week I’ve gotten a 4 and 5 for failing to meet guard mount (?) and a 3 and 3 for 2 minutes late to relief formation. It’s also a four and five for loud laughing and a 3 and 3 for room in disorder during E.S.P. I’ll just have two tours to walk this week end but oh next week end. 16 (underlined) confinements. I’ll be in Friday nite, and Saturday nite, walk 2 (3?) tours Sat afternoon and serve one confinement Sunday afternoon. That means I’ll have from 3 till 6 on Sunday afternoon free.

Toby said that Larkin wrote the OC to go home this week end, but the dough wouldn’t approve it because he said we wouldn’t be just restricted this week end, but quarenteened (sic). If that’s so, we won’t be out till anywhere from 4 to 6 weeks have gone by. All because one boy has got the scarlet fever – Matthews, first sergant (sic) of “A” Co.

I am the g-niece of Thomas Malloy Trotti, I don't know how long your site has been up, but glad I found it !!
If you would could you send me a copy of what you have concerning Tom Trotti?
I have searched for years to see what I could find on him and this I could add to the little I have so far!
Would be greatly appreciated !!!!
If you can or will, send to my E-mail address at: gmorton@shtc.net !
I will forever in your debt !
Thank you so much!
God bless you!!!
Ginger Morton
Chesterfield SC