The Mystery of the Cadet Diary #1 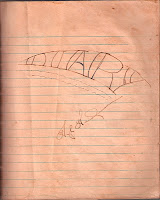 Here are the first two entries in the September 1935 through March 1936 cadet diary:

Got up as usual and went to the details room after breakfast. Mr Williamson had me to take some sergant (sic) chevrons off his arm. I guess he lost his rank when he became a senior. I got back to the room and boy did I have a time getting things in order before I went to that eight o’clock class. When I returned to barracks from Bond Hall, at noon, Mr. Blake informed me that I was pulled for having an untidy basin.

My shoes were through to my socks during the 12:15 drill. The grass makes your shoes so slick, you can hardly stand up. We learned a new movement today and when we tried it at supper formation, hardly a de (?) did it right. That reminds me, I got pulled again at supper formation for tucking in my shirt.

One thing I’ll never forget – yesterday when we marched back from chapel we had to stand at attention while Colonel Gaston gave a speech. After about ten minutes a dozen or more boys had fainted and fallen on the cement. They were of course carried off the quadrangle, but the colonel didn’t lower his voice. He only said “A few of you are dropping out of ranks but you’ll get accustomed to it after a while (sic)

Ummm – I see I haven’t been keeping my diary so well – as a matter of fact I haven’t kept it at all. I shall have to begin anew

Things have changed considerably since I last made any entry. I am no longer having a fascinating time, but on the contrary, a very boring one. The reason I write so poorly is because I was just in G W’s room visiting during E.S.P. when (sic) the door opened I thought sure it was the O.C. but it was only another boy visiting. As a result I am very nervous. I’m not nearly as home sick as I was when I first got back from the Xmas holidays although I would like mighty well to be home. I passed chemistry for the semester and so that lets a big worry off my mind. I haven’t heard from Math, History, Drawing, or Mil (?) Sc (?) yet but I believe I got by on them.

Well I’m going to write what I did today whether Ill (sic) keep it up or not – God knows.

Went to chapel, came back and played ping-pong up in Hughes’ room till dinner, rather a little before dinner – I came back and went to sleep and slept on through dinner, (sic) Got up about 4 o’clock hungry as all get out. The canteen was closed so I went over to the little stand in the park and got a coca-cola (sic) and some candy. I sat down in the park – thinking I might see some jobs (Transcription Note: girls) I could introduce myself to, but no luck (sic) everybody I saw was ultra young. It was too cold I guess.

Went to supper and sat over in “D” company area. Made a break by calling some bird (?) Mr. Ming (?). I saw Mr. Haley today in his civilian clothes. He’s been away for over a week and now he’s come back to quit. Forced to knock off now and get my history note books together. (Transcription Note: Apparently he is following the Southern custom regarding meals, i.e., "lunch" is "dinner" and "dinner" is "supper.")