Veteran's Day (Armistice Day, What Was) 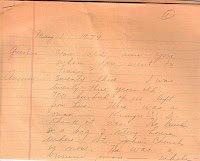 I've been mucking out my office by bits and pieces for months, and I came across this handwritten interview transcript. It was done in 1979 as part of a local writer's club project, a kind of living history we set out to do for posterity. We would talk to as many elderly county residents as were willing to put up with us and compile their recollections -- memory keeping, as it were.

He's listed in the genealogical society's huge reference book of local family histories as "Gene," which is what his contemporaries called him. My grandmother, on the other hand, called him "Bill." Neither of these nicknames, as far as I can tell, has anything to do with his actual name -- Norman Brown Wagner. Unfortunately, there's no one left to ask where the nicknames came from or why, the lesson here being if you wonder about something, follow through.

He was a very complex man, and this is what he looked like. The round disk at the bottom of the photo is his "dog tag." The card is a ticket for the SS Walmer Castle, the troop ship that took him to France. "KEEP THIS CARD" it says. And he did. For all of his life. 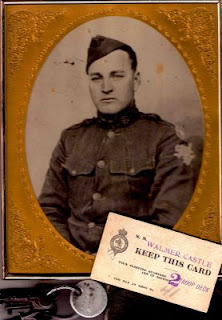 Since the memory keeping project itself has been abandoned, I thought I'd post the transcript of the interview here. For posterity. For World War I researchers. For Veteran's Day. For me.

CR: How old were you when you went to France.

NBW: Twenty-three -- I was twenty-three years old. Seven hundred of us left from here. There was a man -- Kruger (?), I think it was. He lived in a big house where St. John's Church is now. He was a businessman -- wholesale business. He fed all seven hundred of us the day we left. And...Red Cross women handed out little sacks -- bags with sewing needles and thread. Some of them had sweaters in them -- you know, without sleeves.

Took ninety days to get from here to the trenches. I was in the Argonne when the armistice was signed. We went over the top that morning about daylight. It was so foggy and misty, rainy, you couldn't see nobody or nothing. You couldn't hear for the artillery. Anybody three feet in front of you, you had to holler at them. You had to go from one shell hole to another -- big shell holes about two could get in.

And barbed wire. We had a devil of a time. The bunch in front of us -- the Germans reenforced on them, and they started running, so we had to go in -- and we got in that barbed wire.

CR: Tell me about "going over the top."

NBW: That was when -- when you "go over the top," they give you orders to take their trenches. And you do it. Everybody crawls out and most of the time it's hand-to-hand fighting. Bayonets -- but we were lucky enough that morning not to have to do that.

And there was the gas. Sneezing gas. Vomiting gas. And mustard. If you got a whiff of that vomiting gas, you couldn't keep your gas mask on. Wasn't nothing to do but swallow it back -- or die from the mustard gas.

Oh, I was in it for hours -- lay in it. It was scattered all around, but it didn't affect me any -- at least not yet. (Laughs) If you got one whiff of it without your mask, you were about through.

CR: Did you ever get a leave?

NBW: Two weeks in Paris! And then a week in Monte Carlo. Except I didn't have the money to go there. I didn't draw but...$6.50 a month, and that won't do you in Monte Carlo. Boy! That was one place I'd have loved to go. Paris? I stayed right where that big tower is, bunked for half a franc about every night I was there. Slept under the tower one night.

CR: You were twenty-three years old when you went to war. Tell me something you learned from it.

NBW: Well, you might not believe this thing, but every boy I knew of -- and I knew of about four in one company -- even here in the States, they had given up. They said, "If I ever get in a battle, I'll get killed." One of them was my corporal -- Doolan. And they did. Every one of them got killed. The ones that doubted themselves.

And Floyd (family member killed in World War II, NBW's nephew, my first cousin, once removed). You know about him. He told me right downtown when he was home on furlough -- in that old building where the dry cleaners used to be. He said, "If I ever get in any action, I'll get killed." And I said, "Why! Whatever gives you that idea!" It worried me, you know? He said, "I will." And...he did. He...never came back.