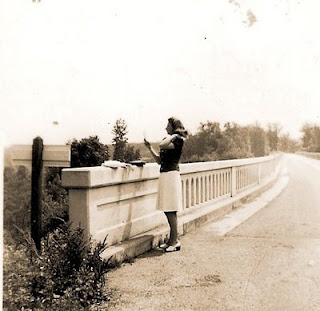 This is my favorite photograph of her -- my first cousin, once removed. It was taken in the 1940s just before World War II, on the Yadkin River bridge between Rowan and Davidson County. One had to primp when one got out of the car during these Sunday afternoon excursions, you see. (Summertime. No air conditioning. Car windows down.) And the traffic, you may notice, was...nonexistent. I -- who can't just look at a photograph and let it go -- always wondered what she was thinking about at this moment. Was she pleased with what she saw in her compact mirror? Was she thinking of the "younger man" who wanted to marry her?

I've been trying to decide if I actually remember her or if I only remember the family stories. From those, I know she was funny and kind, and she loved her brothers and loved to laugh. I think I remember her. There is one old photograph of the both of us together. I am very tiny and look as if I may have learned to walk only moments before the picture was snapped. I'm standing in a front yard; she is exiting the frame to the left.

But that particular photograph isn't the memory I have. I have a vague, shadowy mental image of her in someone's living room. Some special occasion, or perhaps no occasion at all other than her coming home to visit all the way from Washington DC. She moved there with her husband after the War, raised her family there, grew old there.

My favorite story about her is my mother's and my aunt's story as well. When they were still in their teens, influenced no doubt by Hollywood, they all three opted -- not to change their real names exactly -- but to be called "something else," something sassy and unique and all their own. Not only did they pick out new names for themselves, they also somehow persuaded everybody else in the family to abide by their decision. Everybody. The fact that my stern, no nonsense grandfather agreed to this still amazes me.

So. Mary Estelle became "Mitz," Norma Catherine became "Kitty," and Ruby Jeanette became "Jeanne." (Two syllables, if you please.) I personally never heard any of them called by their real names inside the family. Not ever. As I said. Amazing.

Sadly, our Mitz died last Friday, and I'm wondering about this as well. Can you miss someone you're not quite sure you ever knew?