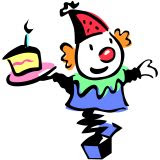 The dh and I went out to eat at one of my favorite places Wednesday evening -- Wink's, that would be for any local folk reading the blog. This was immediate post-Christmas parade so the place was very crowded and a significant number of the crowd happened to be clowns. There were two big tables of them -- eight or ten I was certain were clowns (the fright wigs and grease paint kind of gave them away) and rest were mostly non-clown people. I think.

I mentioned their presence to the dh early on, which of course, he didn't pay any attention to. He was sitting with his back to them, but still. A bit later I said I wished I had my camera.

"Because we're surrounded by clowns," I said. "When was the last time you ate out with a big bunch of clowns?"

"Not as long as you might think," he said.

Anyway. I love dinner and a floor show.
Posted by Cheryl at 5:10 PM