It's been a long time since I've been this distressed, but since I can't do anything about any of it -- crying, pouting and cussing hasn't worked -- I'm going to think (and post) about something else:

What I've learned is that you can ask the child years and years later what their drawings were about, and they can tell you. When my son was a little boy, for example, used to draw pictures of our front yard. The disconcerting part was that it was always full of sharks. (Yes, sharks.) I had no idea why, and at the time, he really couldn't say. But not long ago, I asked him why he always put sharks in the yard. He had no problem explaining. When it rained really hard, he said, and the leaves rushed by in the ditch in front of the house, they would sometimes turn up on their edges --at which point they looked just like a shark's dorsal fin. Later, I happened to witness this phenomena, and guess what? My front yard was full of sharks!

Now let me show you this drawing: 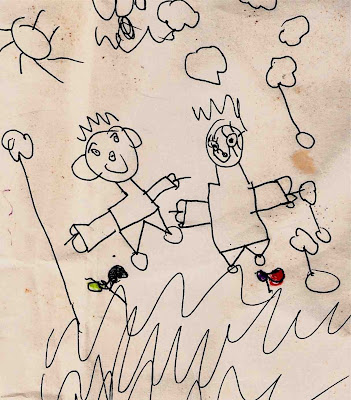 This was done by the senior member of my very talented Art Department when he was three or four. (He's a teenager now.) "What is this about?" I asked recently, and sure enough, he remembered immediately. It's a picture of the two of us, he said -- I'm the lovely creature on the right with the killer eyelashes. On this particular day, we are going searching for bugs -- a green one and a red one. The sun is shining. "And those string things in the sky are what?" I wondered. Not "string things" at all, I found out. Those were raindrops falling from the clouds. Because we like them.

So. The bottom line here is that children always have a reason for what they think and do. It may not make sense to us, but it's very logical to them.

If you have any drawings stashed somewhere at your house and the artist is available, ask for an interpretation of the subject matter. You may be amazed.