Miss Margaret and I may share a limb or two on the Reavis Family Tree. I'm only there by marriage, though; she's an actual Reavis.

I thought I'd post some more of the old family tintypes for her (and you, if you're interested). As I said earlier, they were in my late sister in law's possession. She never mentioned having them and she may not have known they were among the boxes of "stuff" her family had collected. In any event, these folk may be Reavis forebears, or they may be members of the Hopkins, Way, or Clendenon clan. They may not be family members at all or they may be from another branch on the family tree I'm not aware of. We'll never know. 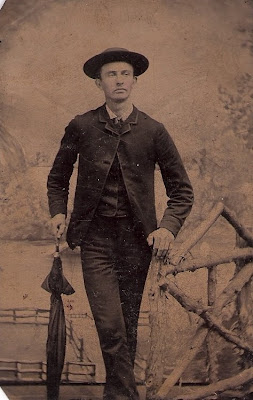 The young man in this next photograph is wearing what I think is a "slouch" hat. Confederate soldiers wore hats like these, but I'm certain this photograph is from a later period. He's also wearing considerable "bling," possibly indicating his status as the oldest or the only son. If I were to guess, I'd say he may have the Reavis men blue eyes: 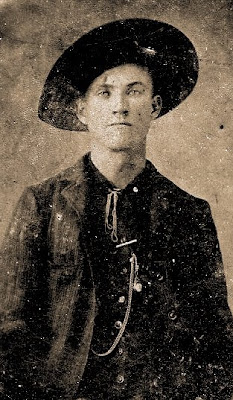 This is one of two women in the collection. About the only thing I can tell from the photo is that the pattern for the bodice of the dress wasn't cut so that the plaids would match: 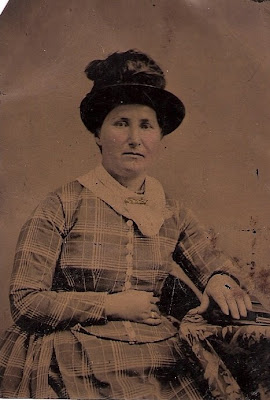 And here's the other one. She's wearing a ring on the third finger of her left hand, which may or may not mean she was married. In some old wedding photos, you can see the wedding ring on the right hand. Unless the photograph was printed in reverse. (shrug) But whatever her status, she has a very world weary expression for one so young. I can't help but wonder what makes her face so grave: 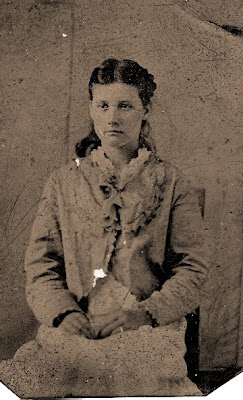 If she happened to belong to this man, it may explain why she looks that way. He's very...intense, isn't he? And no nonsense. No starched collar on the shirt. No watch fobs. He's having his photograph taken -- but I don't think he's happy about it: 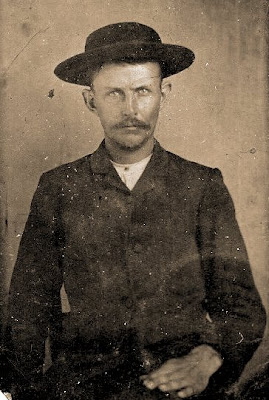