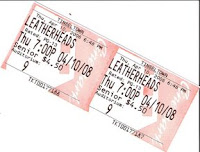 As hoped, the dh and I made it to Tinseltown for a seven o'clock showing of LEATHERHEADS, the first movie I've seen in a theater, I think, since COLD MOUNTAIN -- which is a shame actually, because until the last decade or so, I was a dedicated movie-goer. And I would be again if there were more films worth the trip. Apparently, it's my own fault -- I'm not a teenage boy.

I like "screwball comedies." I like the fact that I might see a place where I've actually been in a film. I like Renée Zellweger. I like George Clooney -- admittedly since I saw him in person. I don't like football. So you see, I went into this with more pros than cons.

I'm happy to say I wasn't disappointed, despite the football thing and despite the comedic timing being slightly off now and then. I would have liked more focus on the romance and less on guys pounding each other into the mud, but that's the romance writer in me. This inner trait also allows me to declare here and now that Renée Zellweger and George Clooney have significant on-screen chemistry. I would especially recommend their dance in the speak-easy to writers and non-writers alike as a very fine example of how to depict almost palpable sexual attraction between a man and a woman without ever being in any way explicit -- something we could use a lot more of these days, in my opinion.

The bottom line here is that LEATHERHEADS is a light-hearted, entertaining movie. Like most movies (and books) it has some flaws, but I'm glad I went -- despite the grown man and woman two seats down who "moo-ed" when the cow came on the screen.

But that's another story.
Posted by Cheryl at 6:35 PM