I keep forgetting that the DH's parents were the age of my grandparents--the DH was born when his mother was well into her 40s.

So I'm often taken aback when I find some of their old photos, like the one below. I told the DH that I'd found a picture of his dad when he was young and looking like one more mean motor scooter (slang for a "bad boy" when I was in high school.) (Yes, there were high schools back then--I didn't realize there was some question about that until one of the Grands asked me about it.)

ANYWAY. This is a photo of Raymond Lafayette Reavis in his youth, husband of Rose, father of Rachel Lucille, Gazelle, and Richard Wayne. He served in World War I (as did my grandfather). At one point, he became a policeman, and he was the only officer on the force who could (or perhaps would) go into the mill villages to keep the peace when All Heck broke loose on Saturday nights.

He worked the 3rd Watch, and when he got off work in the mornings, he often liked to put the older kids in the car and just drive to no place in particular, picking backroads at random just to see where they went. My late sister-in-law told me once that she loved doing this and was never worried about his getting them lost--unlike one of Raymond's brothers-in-law who had a really difficult time with the impromptu nature of one of these jaunts--his first and his last, I believe.

Raymond died young--when the DH was two--of complications from diabetes. The collar on his shirt makes me think that the photo might have been taken circa 1920s. In any event, it would appear that he's got his game face on. He looks like somebody who'd go fearlessly into the mill villages and settle things down, doesn't he? 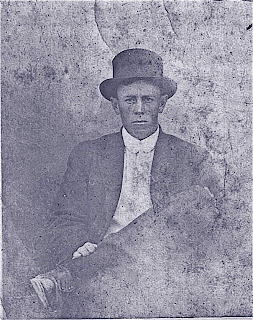 I love those names! Have you used them? What a great story, too. I'm glad your dh knows them, since he didn't get to have memories of his dad.

I haven't used any of the family names, Liz, but I have wondered what the inspiration was for"Lafayette" becoming his middle name. The French general who participated in the Revolutionary War? The street named "Lafayette" here in Salisbury? A friend? None of the above?