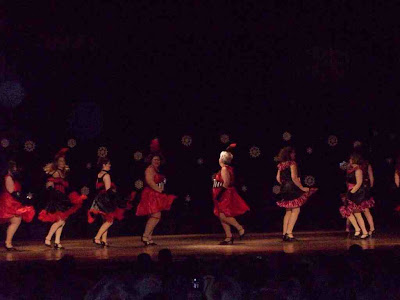 One of the many things I managed to do in the past week or so was to attend my granddaughter's dance recital. She, of course, was adorable and did a wonderful job. I would show you a photo of said granddaughter being adorable (and wonderful), but as I've mentioned before, digital cameras and I are not a good mix. If I were psychic, it would help -- so I could snap the picture BEFORE it happens instead of forever thinking I'm going to end up with what I actually see. I did manage to get a shot of the beautiful and talented adult dance class strutting their stuff. (See above) They did the can-can and essentially brought down the house. Talk about "bustin' a move." These ladies were great.

I have to say I didn't see much in the way of bad tempers during the long wait for her flight to arrive -- among the passengers, that is. They were a pretty jolly group considering the fact that at least one of the flights was going to be three hours late.

The Continental personnel were another matter, however, specifically the young man at the main desk whose life I ruined by asking for a gate pass so I could wait with my 88-year-old mother until her plane arrived. Given the delayed flights from the snowy Northeast and the uproar that caused, I had hoped it would be a good thing to want something he could actually do. I was wrong. He took me off at the knees -- something about how I didn't "need" anything and not doing something or other during Christmas travel. (Let me say here that the line was not that long.)

I like to think that I don't actually look like a hard-core trouble-maker. I had all the credentials and IDs (hers and mine) and the ticket paperwork (don't for one minute think that Continental's "Elite Access" status with the little gold stripes thing means anything in the real world) -- plus my sweet little tiny mother was standing right there in evidence. I asked for pass so I could get through security -- that's all I wanted. I don't know what he thought I meant or why the request was such a problem for him. But then he suddenly gave me the pass, so it all worked out. Except for my being annoyed enough to blog about him here. And the disappeared luggage, of course. Actually, these days I've come to expect disappeared luggage. What I don't expect is blatant and undeserved rudeness.

Okay, I am now getting down off the soap box. Really.

The bottom line here is that my mom arrived safely, and she's going to have a great, if under-wardrobed, Christmas with my sister and her family in Cleveland -- with our World Traveler. He'll be getting home from Morocco on the 23rd. (Yay!)