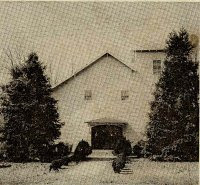 I'm proud to say I grew up among women who could make something edible out of just about anything alive. (You've seen the persimmon pie recipe.) With that in mind, I've selected as today's recipe: "Watermelon Preserves."

Actually, the name is a bit misleading. The preserves aren't made from watermelon per se. They're made from the rind. (Yes, the part you don't eat.) Here's how to do it -- word for word, directly from the cookbook, as before:

I remember eating watermelon rind preserves on several occasions when I was growing up, but I don't remember them having any actual flavor -- not like apple or blackberry or damson. They were sweet, and that's about it. They worked just fine on a hot buttered biscuit, though.